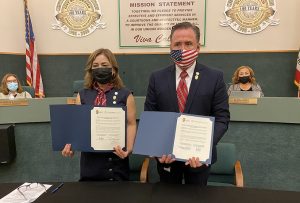 In a ceremony that took place at the Sept. 1st Calexico City Council meeting, Mayor Javier Moreno and Mexicali Mayor Guadalupe Mora signed the reaffirmation of sister cities that will continue the long-standing relationship between the two border cities.

The relationship between both cities goes back more than a century and their binational relationship is now stronger than ever given their recent communication with each other.

The agreement was reaffirmed in 2006 and later in 2017 by former Mayors Armando “Mandy” Real and Gustavo Sanchez to solidify the interest in cooperation between both cities. This strengthens the friendship ties and cooperation that bind them. This agreement also allows for great opportunities in developing border cooperation activities of mutual benefit, in matters related to business, commerce, and culture.

Both cities agree to work together towards the objective of reinvigorating the existing sister cities relations, the sisterhood agreements signed on April 28, 2006, and May 24, 2017, the commitments therein, to promote the exchange of experiences and execution of common activities with the current City of Mexicali Administration and the incoming Administration that will take office in the fall of 2021.

Mayor Javier Moreno and Mayor Pro Tem Camilo Garcia already met with incoming Mexicali Mayor Norma Bustamante to draft a working plan with Calexico when she takes over the mayorship. City Manager Miguel Figueroa has said that the meeting with Bustamante was very productive and will put together a working plan based on the mutual issues have and how to address them.

Former Calexico Mayor Rosie Arreola Fernandez and Mayor Lupita Mora met to talk about the importance of continuing a binational relationship between the two cities on April 26.

“I think our biggest concern as sister cities is the border crossing, and I think the two governments need to continue working together and open those borders because it’s affecting us in the economy,” Fernandez said in a previous interview.

“We need to continue with the relationship we had for the last 100 years and we want to do it by coming to the table and start the dialogue and find solutions. We need to talk about the pandemic and the long border wait times that affect our citizens,” Moreno said during the meeting with the Mexicali Mayor in April.

The meeting was coordinated by former Calexico Mayor Alex Perrone who has a lot of experience in the sister cities relationship. Perrone was Mayor of Calexico 2006-2007 and worked closely with then-Mexicali Mayor Samuel Ramos Flores.