Calexico and Mexicali Officials Meet to Renew their Friendship 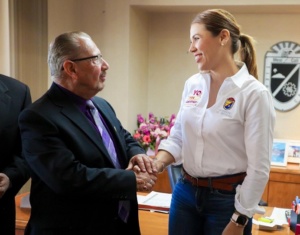 For more than 100 years, Calexico and Mexicali have grown together and had strong commercial and family ties that run deep in this unique border community. This is why a good sister city relationship is beneficial to all.

Calexico Mayor Hodge has been talking about improving the relationship with Mexicali since he took over in July. Hodge said that the meeting with the Mexicali Mayor went beyond his expectations and a good relationship was established.

“The meeting with her was very productive and it was like we knew each other for a very long time,” Hodge said in an interview with Beyond Borders Gazette.

Hodge congratulated her on her recent victory and becoming the first female Mayor of Mexicali. Hodge told Marina Del Pilar that he wanted to renew the sister cities relationship and address topics that are of interest to both.

“We agreed that we needed to work on reducing border wait times and also address air quality problems that affect our residents,” Hodge said.

A project that both Mayors talked about collaborating was planting trees on both sides of the border as a possible first project on the sister cities relationship. Hodge said there was also talk about having cultural exchanges and business attraction.

An invitation was made to Marina Del Pilar to visit Calexico and agreed to continue communicating.