Breaking News
Home / BINATIONAL / Calexico and Mexicali: A Relationship That Keeps On Giving, Part I

Calexico and Mexicali: A Relationship That Keeps On Giving, Part I

Calexico and Mexicali were born at the same time and became the most unique border community in the world.

From the name combination to the tight family and commercial relationship they have, both cities have brought the best out of each other for more than a century. In the mid-1980s Calexico and Mexicali signed the first sister cities agreement that formalized their relationship. Since then, there have been meetings and work between both cites to address common problems they have that are unique to border communities like ours.

While there were meetings between the Mayors of both cities once in a while in official events and celebrations, the relationship between both cities tends to disappear and becomes an afterthought.

In 2005, Mexicali Mayor Samuel Ramos made a priority to have a strong relationship with the Imperial Valley and Calexico.

Around the same time, Councilman Alex Perrone was appointed Mayor of Calexico and also made a point to have a strong relationship with Mexicali since both cities are very connected with each other. Perrone’s family is no stranger to Mexicali since they have done business in Mexicali and have developed relationships throughout the years. When Perrone was elected to city council he worked to expand the relationship between the governments since both cities had a lot of common problems.

“Samuel Ramos for me is one of the best Mayors I have worked with. He was a hard worker, he was open for both city councils to meet where our economic development, public safety, public works teams were able to get to know each other and figure out how to solve our common problems,” Perrone said.

One of the big problems both cities solved was the Union Pacific train that used to cross at 8 in the morning when people take their children to school or go to work. This was a problem that affected both cities for many years and thanks to this relationship they were able to change the time to 6 in the morning when there was not much traffic.

“This solved a lot of stressful problems for people on both sides of the border and this was accomplished thanks to the relationship Calexico and Mexicali had,” Perrone said. 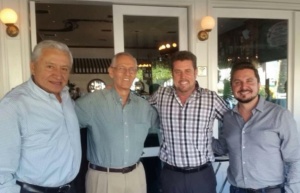 Mayor Samuel Ramos had David Perez-Tejada as his international liaison during his administration and worked with all the cities of the Imperial Valley and local chambers of commerce to extend the friendship and relationship with Mexicali.

“David was a key person in this relationship because he would meet with the cities, chambers, and organizations and would take it back to the Mayor. He was constantly building our bridges for our relationship and understood how important it was for Calexico to have this relationship,” Perrone said.

During the administration of Samuel Ramos and with the work of David Perez-Tejada, they were able to retain a seat at the Committee of Binational Regional Opportunities (COBRO) in the San Diego Association of Governments, a seat in the Southern California Association of Governments (SCAG), they organized  binational economic promotion forums in which the Mega-Region (Yuma, Imperial County, San Diego, Coachella Valley, San Bernardino), were invited and we had the opportunity to represent and promote Mexicali in various national and international forums to promote the region attracting tourism and investment, support citizens with urgent and humanitarian visa problems, in addition to special work with Embassies and Consulates of multiple countries.

”It is very important to keep the relationship alive, to have an area dedicated to the attention of distinguished international visitors and authorities, as well as an Honorary Committee of Sister Cities,  made up of committed citizens that can strengthen ties and ensure that projects endure despite the government that is in turn,” Perez-Tejada stressed.

Perez-Tejada said that there were many accomplishments with the Mexicali-Calexico relationship such as the implementation in a record time of infrastructure works and operation of the SENTRI lane, the signing of the Border 2012 Emergency Response Plan, Formalizing the sister cities agreement between Mexicali and Calexico. The Calexico City Council opposed the burning of agricultural fields that affect the environment, especially the quality of the air, the stance against the arrival of the anti-immigrant group called” Minuteman” in conjunction with former Congressman Bob Filner.  Perez-Tejada recalled that former Congressman Filner supported the creation of a binational table to modify the operating hours of the Union Pacific railroad, among many other procedures.

There were also joint city council meetings between Mexicali and Calexico where they also touched economic development and public safety that was part of their binational agreement.

“When we would receive prospects to invest in Calexico they would always be on the table and vice-versa. When they had people that wanted to invest in Mexicali, we sat on the table with them. It was a good relationship in every aspect between our governments,” he said.

Another key player in this relationship was former Consul General of the Mexican Consulate in Calexico Pablo Arnaud who helped connect and nourish the relationship. Perrone said that Arnaud was very in favor of economic development and had a business background. Add that the former consul was the Mayor of a city in Oaxaca, he knew the importance of the relationship by participating in all the meetings.

“When Mexican investors would come to the consulate he would invite the city of Calexico to the table so he was very key in this relationship also,” Perrone said.

“We now have global trade and if we are thinking parochial or not valuing our neighbor we will lose. They have the manufacturing, big-name companies and they are growing, we don’t. I think we are taking steps backward and that’s sad so someone needs to pick up that torch of building that relationship again and look for economic development,” Perrone said.

Perez-Tejada added: “The Ramos-Perrone relationship was a sincere, lasting and exemplary friendship for what should be replicated in other sister cities along the 3,169 km. of border that exist between Mexico and the United States, so that there is a good understanding and the problems that arise will be sought solution, regardless of the centralist decisions that may be dictated,

“It was a very close relationship, a lot of communication, linkage and joint work to promote the region and integrate as a strategic area despite the neighborhood fence that divides us;  During this time, the Consulate of Mexico in Calexico played an important role with Pablo Arnaud Carreño at the helm, ” Pérez-Tejada said.

Thirteen years after building this relationship between two cities, Perrone, Perez-Tejada, Arnaud, and Ramos continue to have a strong friendship to this day.