Businessmen in Baja California defend investment, jobs and the rule of law 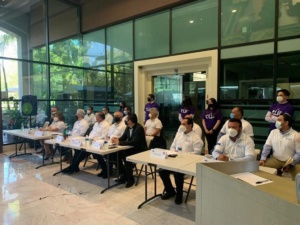 Representatives of the various business organizations in Baja California, met at a press conference, in order to express their disagreement with the various legislative changes that the State Congress has carried out in recent weeks.

The above was reported by Carlos Ibarra Aguiar, State Technical Coordinator of the Business Coordinating Councils, who said that organizations in all municipalities, such as CANIRAC, CANACO, CANACAR, among others, are being strongly affected by the imposition of a new Sanitary License, for which the economic sector decided to call a press conference and announce that the businesses agree to carry out all the sanitary measures required to operate, but that the discontent lies with the new obligation that only seeks to collect more taxes.

Ibarra Aguiar expressed that the Assemblymembers have promoted a series of reforms and new laws that, far from helping society and sustaining jobs during the contingency, their actions have had as a priority the generation of new taxes and political reforms that involve the State in scenarios of uncertainty and lack of transparency.

Miguel Ángel Badiola, president of the State CANIRAC chamber of commerce, pointed out that in order for each restaurant to operate, it is necessary that it already complies with 17 prior permits which each of them also carries an economic burden. He said that this is the most over-regulated sector, and Just for the three-month shutdown, 10,000 jobs have already been reported in the restaurant industry.

For his part, Adolfo Solís Farías, Fiscal Attorney for the organizations, reported that more than ten thousand businesses from various sectors throughout the State signed protection against the legislative proposal for the Sanitary License. He said that these protections will be presented in two phases, the first will be during the first days of July and will include documentation for individuals, while the second week of July they will present everything conducive to legal entities or corporations.

He said that the productive sector of all turns has been united in a single feeling, the defense of the rights of those who support the economy of the localities, for which, owners of micro, small, medium and large companies have decided to act against legislative action that, in addition to being unconstitutional, is clearly generating a social involution, job losses, and economic contraction.

Rodrigo Llantada Ávila, President of the CCE Mexicali, underscored the surprise and enormous sadness that the business sector shows derived from the lack of interest in the legislators to take actions for the benefit of those who, today, bear the responsibility of taking the cities forward by supporting the prevalence of companies and therefore the jobs of Baja Californians.

He spoke about the constant attacks on the Constitution and the Rule of Law that current Assemblymembers have insisted on promoting, first with their approval of reelection without a license and later tried something extremely serious, the intention of reducing the next term of the Baja California governorship from 6 to 3 years, an issue that cannot be justified or understood how this would benefit our society in these times of pandemic.

Llantada Ávila, made a special call to all Assemblymembers to represent society, to fulfill their obligations, to set aside their personal and particular agenda that each legislator could look for. He urged them to defend those proposals that come in a real way to improve the conditions of the State, to take care of public health, and to strengthen the economy by taking care of jobs.

Finally, he invited the authorities to work in unity with society and the business sector to strengthen the measures that contribute to improving the conditions of Baja California families, to implement mechanisms that contribute to the efficient work of institutions, to shield the State Anti-Corruption System and to work as a team, always favoring the common good.