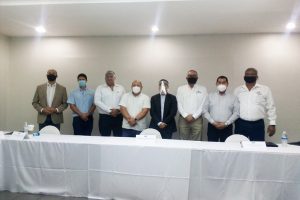 Mexicali, B.C.- A press conference was held this week at the CANACO Mexicali facilities where leaders of various business chambers of commerce shared their concerns about the outlook around the economic impact derived from the current financial crisis and the new taxes that have been imposed in the state.

“We realize that we have different visions, (…) while we are concerned about preserving jobs and promoting economic development in the region, it seems that the decisions go against it,” Llantada said, referring to the legislative decisions taken by the different instances of government.

On the other hand, said López, President of CANACO, companies are being charged by CESPM (State Water Commission) very large amounts for the additional payment of the use or contracting of water and sewerage services, not for the monthly consumption of water, in some cases reaching up to 3 million pesos, he added, it is a difficult situation because due to the current pandemic, many businessmen are considering permanently closing their businesses.

“We have seen how the state government has created new taxes and raised existing taxes during the pandemic. Congress folds its hands before the executive, allowing the government to raise as much taxes as they want in the midst of the worst economic and social crisis ever seen in our lives”, as expressed by Ernesto Elorduy, President of COPARMEX Mexicali.

In addition to the health and financial crisis, there is a strong cut in the money sent by the federal government to Baja California for the next year 2021, which exceeds 840 million pesos.

Miguel Ángel Torres, President of the CANIRAC of the restaurant sector, expressed his disagreement regarding the intensive tax reform this year, then the health license, he added there are 2,500 legal protections they’ve filed and they are in talks with an Assemblymember so that it does get collected.

“There will be no social program, no government collection plan that is enough as long as they are focused on strangling the engine of the economy, which are the micro, small and medium-sized companies with greater fiscal burdens and with greater administrative bureaucracies,” said Elorduy, inviting all Baja Californians to join the demands in order to have a productive state.