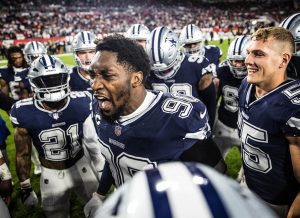 The Tampa Bay Buccaneers qualified for the playoffs for the third straight season in 2022 but then made their quickest exit in that span with a dispiriting 31-14 loss to the visiting Dallas Cowboys in the Wild Card Round on Monday night. The Buccaneers had earned a home game to start the postseason with their second consecutive NFC South title but were beaten soundly by a Cowboys team they had defeated by a 19-3 score in Week One.

“Big credit to them,” said Head Coach Todd Bowles. “They executed both sides of the ball. They were great in the red zone, scoring and defending the red zone. Dak [Prescott] got the ball out and found some places, but we made our blunders well enough to help them along. But they deserve all the credit.

The Cowboys will head to San Francisco next weekend to take on the 49ers in the Divisional Round. The Buccaneers will head into an offseason filled with uncertainty, including the unknown future of 45-year-old quarterback Tom Brady, whose contract expires in March.

“That’s not the way we wanted to end it,” said Brady. “I give them a lot of credit – they played a good game. They made a lot more plays than we did. So, rough night.

“I’m going to go home and get a good night’s sleep, as much as I can tonight. There’s been a lot of focus on this game. One day at a time, truly.”

The Buccaneers won Super Bowl LV at the end of the 2020 season and tied for the NFL’s best regular-season record in 2021 before falling to the eventual-champion Los Angeles Rams on a last-second field goal in the Divisional Round. The team had hopes of a deep playoff run in 2022, even after winning the NFC South with an 8-9 record, but will now turn its attention to 2023.

“Obviously [it’s] not good enough because it’s not where we want to be,” said Bowles. “We fell short two years in a row. You like the courage, you like the fight but we’ve got to get better in a lot of areas and we’ll get to work on that.”

“They took him to the hospital right now, he has a concussion,” said Bowles immediately after the game. “They’ll also test him for potential neck injuries. His fingers were moving when he was down there; I don’t know about the rest.”

Both teams got off to a slow start on offense, with four straight punts to start the game, but while Dak Prescott and the Cowboys eventually found their groove Brady and the Buccaneers never did the same.

The Cowboys’ overall yardage edge of 425 to 386 wasn’t overwhelming, but they dominated in the red zone and completed seven of 13 third downs, plus two of two fourth-down tries. Dallas scored four touchdowns in four red zone trips while the Bucs were just one of three. Tampa Bay failed to score on a pair of first-and-goal situations, one on an end-zone interception by S Jayron Kearse in the first quarter and one on a failed fourth down midway through the final period.