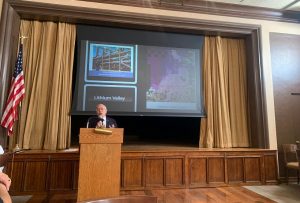 Sam Couchman has been a respected citizen of Brawley and has served the city with honor. As Mayor, he stood proudly before a packed room to give his final State of the City Address as he announced he will not seek re-election.

In an event co-produced by the City of Brawley and The Chamber of Commerce for Greater Brawley, Mayor Couchman spoke about the recent projects the city has. Like all municipalities, Brawley was deeply affected by COVID-19 but they were able to rebound with new housing units, improvement to the downtown area, and new projects that will enhance the quality of life of the city.

“Brawley will continue to prosper. Brawley is thriving and moving forward. We need to be proud of our city,” Mayor Couchman said.

“This is remarkable for a city of our size. The General Fund always suffers because it’s the only reserve we can use discretion about spending,” Couchman said.

The Brawley Police Department officers will have body cameras very soon as they bring back the bike patrol.

Mayor Couchman said the Neighbor’s App for public safety was introduced, where residents can use their home security cameras to upload incidences into the app and contact the police via text for a faster response.

Couchman was raised in Brawley. He attended local schools and obtained a bachelor’s degree in Social Science from San Diego State University. He joined the Brawley City Council in 2009 and is proudest to have contributed to establishing the Veterans Wall in Plaza Park and Brawley Fire Station No. 2.

With a keen appreciation for history and an interest in harnessing opportunities for the future, Couchman aims to advance Brawley’s quality of life by promoting recreational programming, a safe community, and reliable infrastructure. As a City Council Member, Couchman works as an appointee to the Overall Economic Development Commission, Brawley Chamber of Commerce Board Directors, and the Advisory Commission for the Imperial County Air Pollution Control District.

With a passion for history lessons, Couchman’s hobbies include the collection of militaria and coins. As a history buff, he frequently provides historical re-enactments of the Civil War period to enthusiastic audiences of local school-age children.

Couchman is also actively involved in many local organizations. He currently serves with Brawley Rotary Club, in addition to serving as Treasurer for Imperial Valley Coin Club, and a member of the Imperial Valley Rifle & Pistol Association, the Imperial County Historical Society, Brawley Elks Lodge, Hidalgo Society, and Stockmen’s Club of Imperial Valley.

Couchman retired from the County of Imperial in 2010 as the Workforce Development Office Director after thirty-five years of public service. Together, he and his wife, Wanda, have four grown sons and two grandchildren.