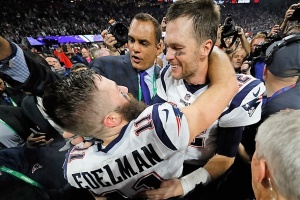 Only one touchdown in the entire game was enough for the New England Patriots to win their sixth Super Bowl championship against the Los Angeles Rams with a score of 13-3.

This victory confirms the dominance of Tom Brady and Bill Belichick as the best quarterback-coach duo in the history of the NFL. They have been together since 2002 when they won their first Super Bowl Championship against the Rams when the franchise was in St. Louis. The sixth championship win puts the Patriots as one of the teams with most wins tying Steelers, Cowboys, and 49ers.

New England’s Rob Gronkowski was a key player of the game finishing the night with 6 catches for 87 yards. Brady threw for 262 yards to vanquish the Rams.

The game registered a 44.9 overnight rating for CBS, the lowest since Super Bowl XLIII in 2009.