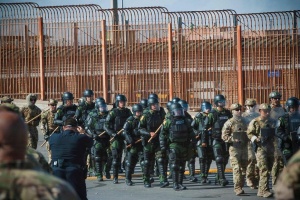 As the first group of the migrant caravan arrived at Tijuana this week, U.S. Customs and Border Protection and Department of Defense officials are ready if they arrive at the Calexico/Mexicali port.

In order to maintain order and keep the borders safe now that the caravan has reached the U.S.-Mexico border, Border Patrol and Customs are working with the Department of Defense to maintain the security of the public that crosses the border daily and ensures commercial travel is not hindered.

Pete Flores, Director of Field Operations, said they are prepared for contingencies and in coordination with the Border Patrol and Department of Defense when caravan makes its way to the border and keep it safe.

“Ultimately, I have the responsibility of keeping those that use the border safely. If we believe that there is an attempt to erode the confidence that we have we will take steps to suspend, modify or close the ports of entry in order to ensure the safety of the traveling public and those that work at the port of entry,” Flores said.

Flores added that they know the importance of trade along the border and will make sure that continues.

“My agents will treat every individual with dignity, respect, and compassion while firmly ensuring our nation’s laws continue to be followed,” Chavez said.

Lieutenant General Jeff Buchanan of the U.S. Army said that there are currently 1,500 troops stationed at the California border to support the Border Patrol. Buchanan said that they are here to provide logistical and intelligence support to secure the border.