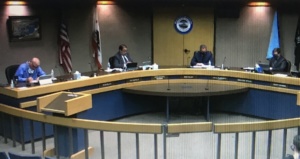 The Imperial County Board of Supervisors will ask Governor Newsom’s administration work with state and federal counterparts in Baja California and Mexico to work in coordination regarding cross-border impacts of COVID-19.

While California is entering stage 2 that will reopen some sectors of the economy, Baja California still has strict stay-at-home orders and there is still no plan to reopen the economy as of yet. That’s why the Imperial County Board of Supervisors is asking California Gov. Gavin Newsom to work with Baja California Governor Jaime Bonilla and work on a plan that addresses the COVID-19 situation and work together for the best of the border region.

San Diego and Imperial County hold a unique border position in the State as the only two counties sharing an international border. Since late March, the Department of Homeland Security placed border-crossing restrictions on all non-essential travel at land ports of entry between the United States and Mexico.

Imperial County’s economy depends greatly in the relationship with Mexico. According to a 2016 study, Calexico and Mexicali border crossers contribute approximately 20 percent of the total spending in Imperial County. Due to this connection, dependence, and proximity, Supervisor District 1 Jesus Escobar feels it is important that there should be a coordinated effort with the southern neighbors as they move forward with reopening the economies. Supervisor Escobar feels that this effort should be lead by the State of California with their counterparts in Baja California.

“There needs to be communication between both sides,” Escobar said, “We have an economic dependence but also people get their health care needs by crossing the border so it is important that they communicate,”

Supervisor Escobar reached out to the San Diego County Board of Supervisors Greg Cox and Jim Desmond and expressed support to jointly reach out to Governor Gavin Newsom to make the request.

“I have spoken to Supervisor Cox and Desmond from San Diego and they are on board but they need to approve the letter at their meeting as well,” Supervisor Escobar said.

The County Board approved the letter by a vote of 5-0.

The board also expressed their concern with the long border wait times crossing to Calexico during the last couple of days. Supervisor District 5 Ray Castillo said that there was a five-hour line on Sunday to cross and asked to talk to Customs and Border Protection and the Office of Congressman Juan Vargas to look at this situation. Castillo said that one of the reasons if due to the reduction of staffing and the hours of the east port of entry reduced from 6 a.m. to 2 p.m.

The Supervisors also learned that farmworkers have waited five hours to cross to Calexico to get to their work. The county will also be addressing that matter this week.