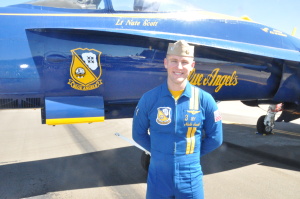 The Blue Angels are back in the Imperial Valley and are ready to bring their show once again this Saturday.

NAF El Centro hosted a press conference where media had access to the pilots and other participants of the Air Show. Blue Angels Pilot Lieutenant Nate Scott is a fourth generation Navy and always wanted to be part of the Blue Angels since he was a kid and became part of the squad September of last year.

“It’s a unique team for sure, we basically represent the fleet and functions unlike any organization I have been a part of but at the same time it’s the best of the Navy Marine Corps.” Lt. Scott said. “The men and women that serve in our team are the best and brightest we have and make sure everything functions properly.”

“We start early in the morning making sure all jets are ready and nothing is missing and everything is functioning before the pilots start flying.” Benattar said. “That’s part of the trust the pilots put in us in the maintenance of their planes.”

Benattar said he is proud to represent Mexicali with the Blue Angels and work with the Navy team.

Stephen McCartney, pilot from the Commemorative Air Force, will be participating at the Air Show as well. The CAF was founded to acquire, restore and preserve in flying condition a complete collection of combat aircraft which were flown by all military services in the United States, and selected aircraft of other nations, for the education and enjoyment of present and future generations of Americans. More than a collection of airworthy warplanes from the past, The CAF Ghost Squadron, recreate, remind and reinforce the lessons learned from the defining moments in American military aviation history.

“There are so few of these airplanes left and the general public doesn’t understand about World War II aviation. So we bring all this together to show what the planes can do and honor WWII folks that were fighting for to keep our freedoms.” McCartney.

Another participant of the Air Show will be Spencer Suderman who is a Guinness World Record holder. Spencer flew the Sundbird S-1x, an experimental variant of the Pitts S-1x biplane to an altitude of 24,500’ in the restricted airspace over the Barry M. Goldwater Range in Yuma, Arizona then entered and inverted flat spin. At an altitude of 2,000’s the recovery was initiated and the Sunbird smoothly returned to level flight at 1,200’. A new world record of 98 inverted flat spins crushed the previous Guinness World Records of 81 that Spencer previously set in 2014.

“They keep inviting me to the NAF Air Show every year but it’s all been good and hope it continues to be good. “ Spencer said. “The El Centro Air Show is a wonderful experience, its action packed, you see a combination of precision military flying with the Blue Angels and then we see some civilian acts, old War War II acts and other high performance military jets. We will see much a mix of entertainment that is mind boggling and also great for the kids and see the things they learn in school.”

The Air Show will take place this Saturday, March 11, at NAF El Centro. Gates open at 9 AM.