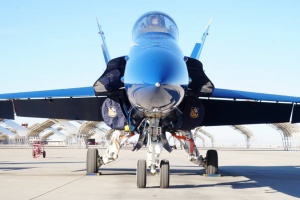 A squadron of Navy jets flew through the skies breaking the sound barrier and then landed to the place they will call home for the next few months.

The squadron was none other than the Blue Angels who arrived Jan. 3 to the Naval Air Facility in El Centro, California for their winter training and preparation for the annual Air Show March 16. For more than 50 years, the “blues” have delighted the residents of the Imperial Valley driving thousands of people to the air show that combines a day of family entertainment with a spectacular air show by the Blue Angels.

“The goal of the air show is not only to educate everyone about the mission of the base and the work we do here but also is to thank them for being such great neighbors through the year and allow us to do what we need to do train all of these warfighters in their job,” said Kris Haugh, Public Affairs Officer at NAF El Centro.

Aside from the air show, there will be other events that people can enjoy and participate in:

Feb. 23.- The 9th Annual Blue Angels 10k Fun Run that will begin at Sunbeam Lake and will head up to Seeley.

March 15.- 2019 Entertainment and Food Festival where people will be able to meet the pilots on a personal basis and enjoy an evening of live entertainment, food vendors and fireworks display.

The Blue Angels flew from Fort Lauderdale, Florida to NAF El Centro and took them four hours to get here. Despite the long trip, their pilots spoke to the media about their work and experience working for the Blue Angels. Pilots such as Major Jeff Mullins are excited to be part of this show and deliver for the residents of the Imperial Valley.

“El Centro is our second home, our winter home, we will be doing over 125 flights here so we will get to see a lot of the Imperial Valley. It’s the beginning of a new season for us and we will see the team come together as we begin our training,” Major Mullins said.

The Blue Angels Air Show will take place March. 16 at 9 a.m. at the Naval Air Facility in El Centro.