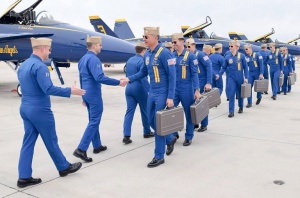 Imperial Valley’s biggest attraction is now in El Centro for winter training. The Blue Angels landed at the Naval Air Facility in El Centro, California on Wednesday, January 3rd to commence a ten week training session that will prepare them for the annual Air Show on Saturday, March 10. Admission is free to the public and there will be other exhibitions at the Air Show that will be announced in the coming days.

The Blue Angels arrived at NAF El Centro along with the maintenance group to get everything ready for the upcoming Air Show that has been a tradition in Imperial Valley for more than thirty years.

During winter training, the pilots fly two practice sessions per day, six days a week, in order to fly the 120 training missions needed to perform the demonstration safely.