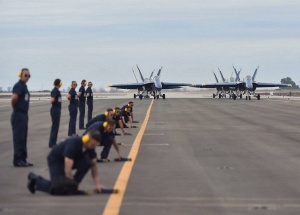 A cloudy, rainy day in the Imperial Valley was not enough to stop thousands of residents from enjoying the annual air show that has become a tradition for more than thirty years.

With a spectacular air show that began at 2 p.m. on March 10, the Blue Angels began their show exhibiting their best aerial tactics to the amazement of the public. The squadron had a ten week training session that prepared them for the annual Air Show on Saturday held on March 10.

There were also other pilots that performed during the air show. These pilots are invited from different parts of the country to showcase their airplanes and fly in a demonstration.

Aside from the Air Show, the Blue Angels organized a ten mile run that was very successful in its eight annual edition that was held at Sunbeam Lake. The Blue Angels also made visits to schools to talk to the students about the Navy and the Blue Angels program. This is part of the community outreach the Angels did during their stay in the Imperial Valley.

During winter training, the pilots fly two practice sessions per day, six days a week, in order to fly the 120 training missions needed to perform the demonstration safely.