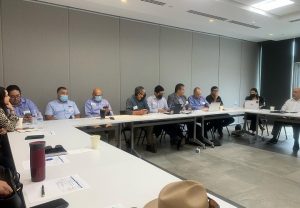 Leaders from both sides of the border gathered at Punta Este Mexicali to host a binational July 14 meeting to discuss border infrastructure, economic development, and education.

The Imperial-Mexicali Binational Alliance (IMBA) is a forum where public and private economic development organizations on both sides of the border separating Imperial County, USA, and Mexicali, Mexico, as well as public entities that facilitate economic development (such as the Imperial County Transportation Commission), address matters pertaining specifically to border infrastructure and larger environmental and economic trends that can influence cross-border trade.

Staff at the IMBA is collaborating with the Imperial Valley Economic Development Corporation in implementing efforts to market and position both the Imperial County and Mexicali regions.

During the meeting, it was highlighted the recent partnership made between El Centro Regional Medical Center (ECRMC) and Grupo Educativo 16 de Septiembre targeting one of the most important needs of having trained personnel in the area of ​​health in southern California and providing greater opportunities for professional and personal growth for nursing degree students.

The first generation of Bachelors in Nursing will graduate in 2022 with a total of 54 potential students who will have an opportunity to obtain a formal job at the ECRMC. The agreement calls for the training of students to be enriched by proving English language proficiency in addition to the binational cultural-educational exchange that this entails.

There is also a working relationship between Centro de Estudios 16 de Septiembre and Imperial Valley College.

The El Centro Regional Medical Center is an acute-care medical center that has been serving the health care needs of the Imperial Valley since 1956. After a $44 million expansion, what started as a 34-bed licensed hospital has grown into a 161-bed, state-of-the-art facility. The expansion project allowed for the construction of a state-of-the-art new trauma center and rooftop heliport for superior trauma care. In FY 2016-2017, ECRMC treated 4,616 adults on an inpatient basis. In terms of outpatient care, there were 48,805 emergency room visits, 92,797 hospital outpatient procedures, and 4,998 outpatient surgeries in the Fiscal Year 2016-2017.8 ECRMC also operates outpatient clinics in El Centro and Calexico.