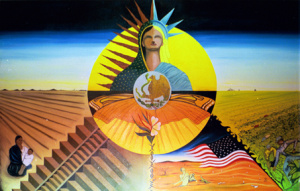 The border region is the place where many people were brought up and influenced by both cultures, Mexican and American. It’s hard to say that a person born and raised in the US, living by the border, born to Mexican parents or even American with no Mexican roots but living by the border, would just ignore what Mexico, its culture, and history is all about. The same thing happens with a person who naturalized and became a national by law when he thinks on both cultures, but what do we mean by Binational Identity?

Binational Identity involves the psycho-historical processes that distinguish Mexicanos and Chicanos from the rest of society, and how much they emphasize ethnicity and what aspects of ethnicity are brought to the socialization of people.

As a topic focused on border people, appropriate is to say that Latino population has increased and has begun to spread wide across the nation. Binational Identity covers how aspects such as language, culture, and social environment impact and construct the identity of individuals. In this case, we are focused on the group that’s identified with Mexico and US, which relate to a Mexican-American Binational Identity, its understanding would add significant value to our region.

Due to the fact that my own life is mirrored in my portrayal of border society and my interpretation of border phenomena, it seems appropriate to reveal that I myself was raised in the Baja California – California border. I spent most of my childhood in the Mexican side, in Mexicali, the capital of the state where I was born, so I had the chance to attend elementary school there. When I was twelve, my family moved permanently to Phoenix, Arizona as legal U.S. Residents, I then began to experience life in the U.S and started to create my own perspective from an American view point.

The first thing that impacted my life was the so many educational opportunities I was offered and given in school. I was able to develop my artistic talents which had previously been tested in Mexico, when I was in 3rd grade and won the 1st place in a statewide drawing contest. The same thing happened when I was a freshman in High School, I was able to participate in a drawing contest ending up winning the 1st place. My teachers were very supportive, I could see how most teachers were really involved and cared about their students. I fell in love with American culture, history and its foundation. My favorite classes were English, History, Government, JROTC and Art, besides weight training.

I was able to be very successful in school, and picked up the language very easily because I had English classes since I was 6. By the time I was 18 I became a naturalized U.S Citizen. So shortly after, when I was 19 we moved to the Imperial Valley, where I continued my education. My parents owned a home in Mexicali, so I used to go visit family and stayed there most weekends. Due to the fact that I was a bookworm since I was only 10 and loved to read very complex books in Spanish and English, I was able to speak Spanish as a native, and never lost my Spanish accent, developing new vocabulary gradually.

When I graduated from my undergraduate program and then started a certificate in San Diego, I had to commute back and forth every week to earn my paralegal degree and then used my bilingual skills and profit from it, so I enrolled in the two years certificate interpretation and translation program earning my degree in that subject, then recently earning my MFA in Creative Writing.

Incidentally, I got more and more involved with Mexican-American culture. At the age of 24, I opened my first business in Mexicali, which was an English School. After a year with the business we had about 450 students enrolled and 4 contracts with factories in the city to teach their workers English. It was an adventure! So, I got to know many people in the industry and the business sector in Baja California. Time passed and I always continued to prepare myself and work in both sides of the border, as a legal professional, court interpreter for the government and the medical field, book translator, editor, writer and business owner in Mexico.

From my perspective I can say that I love both, Mexico and the United States, why? Because I’ve seen the best of both countries. I’ve been treated well by both. America has been my home, the one that educated me and where I’ve had so many opportunities and friends that I strongly value, where I’ve been always treated with respect. On the other hand, Mexico is the land of my parents, the place where I was born, where I do business and interact with many friends, honest and talented people who care deeply about their communities, so they’re doing something positive to make the world better.

Some people think that for Mexico, the relationship with the United States is complicated and for that they’re filled with hard feelings, but I don’t believe it. It’s just a small percentage of the population. Most Americans don’t know about the fact that, in 1848, the United States invaded Mexico and forced its leaders to sign over half their territory at the point of rifle. For some Mexicans, may be the eldest generation, this event could still remain in their minds.

The U.S defeat of Mexico meant a loss of national identity, common language and culture, with their countrywomen and men. This fostered a castelike status, new U.S. citizens labelled the Creation generation (1848-1900), with three succeeding generations, the Migrant generation (1900-1942), the Mexican American generation (1942-1966) and the Chicano generation (1966-present). Differences in nativity and language augmented by historical and economic forces, provide the backdrop for differences in the ways these generations think about themselves.

The binational identity represents both mobility and loyalty to ethnic roots. The U.S. middle class and binational identities capture what is suggests common ways the Mexican American generation interpreted their experiences and developed constructions of themselves in the social structure of the United States.

At the present day there are more than 35 million Mexican-Americans living in the United States, whose perspectives about Mexico and binational culture are different. Mexico has winners and losers, people for whom the country provides opportunities and others for whom it doesn’t. The reason there are so many people of Mexican ancestry living in cities like Los Angeles, Las Vegas, Phoenix, Denver or San Antonio is because, there was a person, maybe a parent or grandparent, who was shut out from opportunity in Mexico and had to go north. And more often than not, that person fit a profile — dark skin, little education, and poor, but not all of them, there were also some people who moved because even though they had opportunities in Mexico, they were offered a better option in the States, such is my dad’s case.

The border region is an enviable geographical area where many businesses can take place.  For that reason, I wonder how can there be some people who feel ashamed of their roots. I remember once in a class back in college there was a student debating about how he didn’t like being confused with Mexicans or being called “Mexican”, he said he didn’t even speak Spanish, to which I answered: “There is no reason for you to feel that way, there are many prosperous people in Mexico who were born in the US but had invested in Mexico and they’re profiting from it. There are poor people and there are very wealthy ones as well who have a different perspective about the world. You should learn from them and be proud of your roots, culture and language, if you were 100% bilingual, you could even profit from it, like I do!”

As President Peña Nieto said during his visit to the White House: “The United States and Mexico have enjoyed a unique and flourishing relationship over the past decades. I am embarking on new ways in which Mexico and the United States can strengthen our ties in order to make North America the most prosperous and competitive region in the world.” That is certainly a very ambitious and positive statement, thus once the government creates the means to work and better our relationships and countries, it would only depend on us doing the work and taking advantage of the great opportunity we own by being a “borderlander” or having a “Binational Identity”.