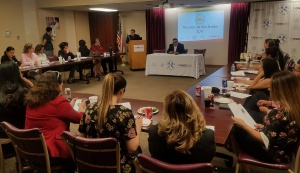 The report took place at Pioneers Memorial Hospital where the agencies that participated were present to see the results of a successful month of activities on both sides of the border. The priority topics during Binational Health Week were chronic illness, access to health insurance, mental health, women’s health, and transmissible diseases.

Binational Health Week had activities in the seven cities of Imperial Valley and its unincorporated areas and Mexicali.

The annual “Caminata Lazo Rosa” continued its mission to commemorate cancer awareness month. Groups from both sides of the border met at the border fence to show solidarity and to show that health issues has no borders.

Binational Health Week concluded with the Farm Workers Health Fair. Approximately 400 farm workers attend this fair annually to get information and medical exams free of charge. The age range of the farm workers went from 18 to 79 years old.