On Friday, Sept. 27, 2017, Mexicali was the host of the first mayor’s summit. The event gathered the mayors from Imperial Valley, Yuma, Somerton, and San Luis, Arizona, and Sonora. This was the first event of its kind in Mexicali to set a working agenda to solve common problems.

Mexicali Mayor Gustavo Sanchez said that this summit was a step in the right direction for the region to discuss border trade, economic development, and coordination between public safety communication between their police departments.

The energy was high and in a time where border walls and anti-immigrant rhetoric was on the rise, the border community of our region raises their voice showing everyone that there is more to the U.S.-Mexico border community than just illegal immigration.

The meetings continued in different cities addressing issues such as public safety, environment and for the first time ever the Imperial Valley became an active participant of the 4FrontED in Yuma, Arizona.

The last meeting was held in April during the week of celebrations of Calexico’s 110 anniversary.

We haven’t heard anything about a future meeting since then. This year Mexicali Mayor Sanchez will run for re-election and seek another term as Mayor. For the most part of this yea 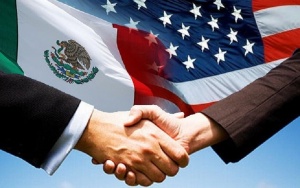 r, his focus will be on his campaign and win the voters once again. However, the focus of bringing the mayors of both sides of the border and the agenda created from it should not be lost.

During the regional economic development summit hosted by Mayor Douglas Nicholls in Yuma, Arizona I asked the Mayor how would this unity between the border cities regardless of who comes and goes in the years to come. Nicholls said that they have the staff to continue this binational relationship since they have forged a strong relationship between the cities.

“I see this as a direction that can look at the region as a whole and bring greater prosperity, greater growth, and combine our strengths and fill any shortcomings we have,” Mayor Nicholls said back in March of last year.

Mayor Sanchez was also key to re-signed the sister cities agreement with Calexico. Armando Real and Maritza Hurtado had a close relationship with Sanchez but they are now gone from the council.

Will the new Calexico City Council work closely with Sanchez or is this the beginning of a distant relationship between the two so-called sister cities?

What will happen if Sanchez does not get re-elected? He and the rest of his team will be gone and the new Mayor will reset the priorities of his or her administration. Democracy will decide the direction of our communities but I think the cities should make an effort to work together in binational efforts. Regardless of who stays and goes in each election cycle, binational work should remain.

The federal governments of Mexico and the United States should know that the border needs more support in education, air quality, economic development, environment, and public safety. Only through this way can we overcome the unique challenges of living in the border.