Binational Alliance Celebrates a Year of Successful Collaboration for The Region 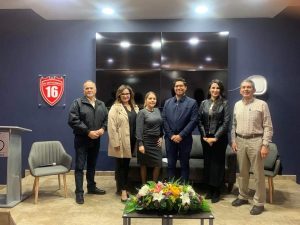 After a year of successful binational collaboration, the Imperial Valley Mexicali Binational Alliance had its final meeting of 2022 at Preparatoria 16 de Septiembre.

The Imperial-Mexicali Binational Alliance usually meets on the 2nd Thursday of the month on a bi-monthly basis and rotates between Imperial and Mexicali.

“It was a year of challenges and opportunities but we are all here working pro bono because we believe our Mexicali and Imperial Valley and working together as a mega-region we can potentialize the area,” said Andres Ruelas, outgoing president of the committee. Tom DuBose will be the president of IMBA next year.

“We see the results in the port of entry expansion, environmental issues. Even the Baja California congress enacted a law to regulate field burning and comes from the push we have made from this binational alliance,” Acuna said.

The Imperial-Mexicali Bi-National Alliance (IMBA) is a forum where public and private economic development organizations on both sides of the border separating Imperial County, USA, and Mexicali, Mexico, as well as public entities that facilitate economic development (such as the Imperial County Transportation Commission), address matters pertaining specifically to border infrastructure and larger environmental and economic trends that can influence cross-border trade.

The Imperial County Transportation Commission is the co-lead to implement in partnership with Imperial Valley EDC and Mexicali’s EDC (CDEM) the Imperial-Mexicali Binational Alliance (IMBA). The goals of this group are focused on Cross-border transportation, infrastructure, economic development, and environmental issues. They have a focus on trying to implement short-term low-cost improvements, if possible, and to have a consensus on priorities for issues and specific improvements. In addition to the lead agencies, the participants for this group include the Cities of Calexico and Mexicali; the County of Imperial; the State of Baja California’s Cabinet Offices of Transportation/Urban Planning (SIDUE), Environment, and Economic Development; Caltrans; US and Mexico Federal Agencies at the border, such as GSA and CBP; and the Secretary for Communications and Transportation (SCT) and Customs.