It is estimated that only 30% of public transportation circulated in Tijuana. The United States Consulate General in Tijuana issued an alert after the violent events that occurred in Baja California over the weekend.

The decision of the businesses to not operate over the weekend will have a considerable impact on the economics of the city and the state of BC.

The violence and criminal incidence that exists in the city of Tijuana is alarming, so more video surveillance cameras must be placed in all areas of this border city and the state, and there must be a well-trained police force that takes care of it and does not extort visitors who support Baja California’s economy and tourism.

“Violence and insecurity threaten the economic growth of Tijuana and Baja California in 2022,” said Dr. Alejandro Díaz-Bautista, an international economist as well as a research professor at the Northern Border College (Colef).

An effective government that promotes the development of Tijuana and BC, managerial and intelligent, is what citizens deserve in 2022. 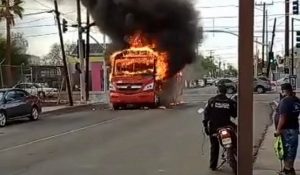 Broad sectors of the population are frightened and unhappy with the management of the city of Tijuana and the state in 2022. Due to fires in transport units, many drivers decided to suspend service out of fear and terror of the violence that is experienced.

While businesses and companies in Tijuana and Baja California are affected by billions in losses due to the insecurity situation in Mexico. In recent weeks, acts of violence have intensified in the north and west of the country, putting the safety of citizens and economic activities at risk, causing billions in economic losses in the industry, tourism sector, trade and services sectors.

The burning of vehicles, businesses and robberies have become a constant threat to the society of the northern border states such as Baja California and Chihuahua.

The wave of violence that we have observed in recent days affected 18.9 percent of the GDP generated in the country, measured by the specific weight of what each state contributes in the INEGI measurement.

The states of Jalisco, Guanajuato, Baja California and Chihuahua contribute 18.9 percent of the country’s GDP, that is, almost a fifth of the Mexican economy.