Bill Aims To Put God Back In Arizona Classrooms 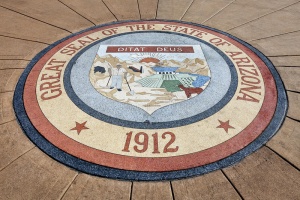 Teachers in Arizona could soon be allowed to place the phrase “God Enriches” inside of their classrooms. According to text from SB 1289, it would enable a teacher or administrator in any school in Arizona to read or post in any school building copies or excerpts of the following materials:

Although the state Senate along with the Republicans on the Education Committee approved the bill; it still requires endorsement of the full House before it gets passed. Tory Roberg, lobbyist for the Secular Coalition for Arizona, is objecting the bill and told lawmakers: “The English translation of the motto is not the Arizona state motto. We’re talking about allowing teachers to put a sign on the wall with the words ‘God enriches’ with no explanation.”

Rep. Rusty Bowers, R-Mesa, doesn’t consider the words to be intolerant. “All it would say to someone who believed is there might be some power, any power, as they wish to identify it,” he said.

Source: ALL ABOUT ARIZONA NEWS