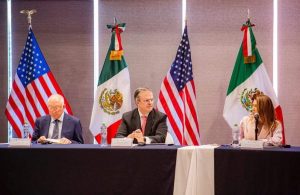 The Governor of Baja California, Marina del Pilar Avila Olmeda, participated, together with the head of the Secretary of Foreign Affairs (SRE), Marcelo Ebrard Casaubón, and the United States Ambassador to Mexico, Ken Salazar, in the Strategic Border Infrastructure Forum, where they discussed projects that will revolutionize binational relations and mobility.

In her message, the Head of the Executive Power of Baja California highlighted the work of Foreign Minister Marcelo Ebrard for always maintaining a policy of support for the State and its population, which is why the federal official has the support of Baja Californians for the Development of a better foreign policy for Mexico.

She also expressed that Ambassador Ken Salazar has paid special attention to the dynamic relationship between California and Baja California, triggering strategic infrastructure projects that are aimed at promoting the correct development of a growing mega-region from a demographic and economic perspective.

“The State Government understands the importance of binational relations and this great commercial corridor that involves Baja California and California, as well as Arizona, with which we also share a border,” said Marina del Pilar.

Likewise, the Governor expressed that the federal authorities of Mexico and the United States have the will of the Baja California administration to continue with the work carried out on border matters since the border between Baja California and California is precisely one of the most important and more crusades worldwide.

Marina del Pilar added that the Ministry of Foreign Affairs has been present at all the work tables to contribute to matters of its competence, strengthening security around the area where the works of the Otay II checkpoint are being carried out, thus advancing as in the complementary works of the port of entry between Mexicali and Calexico.

Likewise, he thanked the Government of Mexico for following up on all the projects, and especially Ebrard Casaubón for permanently supporting the Government of Baja California, since they have had an open line of coordination with the state administration, specifying actions that contribute to the transformation of the entity.

Within the forum, relevant aspects of the United States Infrastructure, Investment, and Labor Law in terms of border infrastructure were addressed, as well as projects of the Customs and Border Protection Office (CBP for its acronym in English) of non-federal financing.