Biden Takes the Lead in the Presidential Election 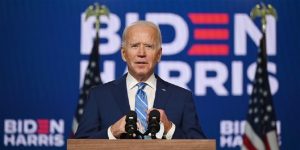 Joe Biden is getting closer to become the next president of the United States as he has taken a small lead in some of the battleground states Friday morning.

Joe Biden has overtaken President Trump in Pennsylvania and in Georgia, as vote counting continues. He is also holding onto a lead in Arizona and has slightly increased his lead in Nevada. Mr. Trump is ahead of Biden in North Carolina.  Just after 8 a.m. Friday, Biden pulled into the lead by 5,587 votes or 0.1%.

He has 49.4% of the vote in Pennsylvania compared to Mr. Trump’s 49.3%, with 95% of votes counted. Biden widened his lead over Mr. Trump in Nevada, too — by 22,076 votes after more results were announced Friday morning in Clark County, the most populous county in the state. He now holds a 1.7% lead over the president. In Georgia, too, Biden now has a slight 1,579-vote lead over Mr. Trump. The Georgia secretary of state predicted there would be a recount. At this point, the two both have 49.4% support, and the state mandates a recount if the difference between the candidates is under 0.5%.

“Donald Trump is going to court to stop votes from being counted. We have assembled the largest election protection effort in history to fight back and need your help,” Biden said on Twitter.

Biden has urged patience as the count continues, while Trump has made baseless claims of voter fraud and his campaign has mounted several legal challenges.

Pennsylvania has 20 Electoral College votes at stake. If Biden is projected as the winner of the Keystone State, it would push him over the 270 electoral vote threshold needed to secure the presidency, leaving him with at least 273 such votes, pending legal challenges, and any recounts in states.

Border Travel Restrictions to Continue Through the Month of August