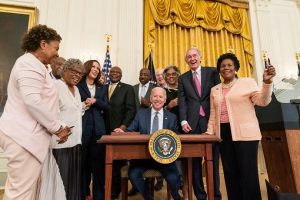 President Biden and Vice President Kamala Harris signed into law a bill establishing Juneteenth National Independence Day, a celebration designating the end of slavery in the United States as a federal holiday.

The law takes effect immediately and will be celebrated on Friday, June 18, since it is the closest weekday. The bill faced only slight opposition in the House of Representatives earlier this week from some Republicans who cast the measure as racially divisive. Despite protests, only 14 members of the House GOP caucus voted against the legislation. The bill passed unanimously in the Senate.

“Juneteenth marks both the long, hard night of slavery and subjugation and a promise of a brighter morning to come. This is a day of profound — in my view — profound weight and profound power,” Biden said. “A day in which we remember the moral stain, the terrible toll that slavery took on the country and continues to take — what I’ve long called “America’s original sin.” At the same time, I also remember the extraordinary capacity to heal, and to hope, and to emerge from the most painful moments and a bitter, bitter version of ourselves, but to make a better version of ourselves.”

Although the Emancipation Proclamation declared an end to slavery in the Confederate States, slavery was still legal and practiced in two Union border states – Delaware and Kentucky – until December 6, 1865, when ratification of the Thirteenth Amendment to the Constitution abolished chattel slavery nationwide. Additionally, Indian Territories that had sided with the Confederacy, namely the Choctaw, were the last to release those enslaved, in 1866.

June 19 celebrations date to 1866, at first involving church-centered community gatherings in Texas. It spread across the South and became more commercialized in the 1920s and 1930s, often centering on a food festival. Participants in the Great Migration out of the South carried their celebrations to other parts of the country. During the Civil Rights Movement of the 1960s, these celebrations were eclipsed by the struggle for postwar civil rights but grew in popularity again in the 1970s with a focus on African-American freedom and African-American arts. As of 2021, North Dakota and South Dakota are the only states that do not recognize Juneteenth, according to the Congressional Research Service.