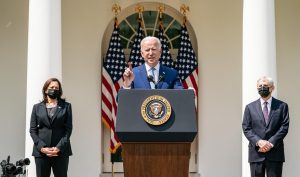 The White House’s moves include directing the Department of Justice to craft a rule addressing the spread of untraceable “ghost guns” and publish an example of “red flag” legislation for states to follow.

“These are (Ghost) guns that are homemade, built from a kit that includes the directions on how to finish the firearm. You can go buy the kit. They have no serial numbers, so when they show up at a crime scene, they can’t be traced. And the buyers aren’t required to pass a background check to buy the kit to make the gun. Consequently, anyone — anyone from a criminal to a terrorist can buy this kit and, in as little as 30 minutes, put together a weapon,” Biden said.

Biden says he wants to see these kits treated as firearms under the Gun Control Act, which is going to require that the seller and manufacturers make the key parts with serial numbers and run background checks on the buyers when they walk in to buy that package.

Red-flag laws allow police or family members to petition a court to bar an individual from accessing firearms. Biden also called for a federal red-flag law, saying such legislation would prevent suicides, protect women from domestic violence, and stop mass shooters before they carry out an attack.

“To put this in perspective, more than half of all suicides, for example, involve the use of a firearm. But when a gun is not available a suicide attempt — the death rate drops precipitously.  States that have red flag laws have seen and — seen a reduction in the number of suicides in their states,” Biden added.

These bills require background checks for anyone purchasing a gun at a gun show or an online sale.

Biden said every day in this country, 316 people are shot.

“Every single day.  A hundred and six of them die every day.  Our flag was still flying at half-staff for the victims of the horrific murder of 8 primarily Asian American people in Georgia when 10 more lives were taken in mass murder in Colorado, Biden said.

“They’ve offered plenty of thoughts and prayers — members of Congress — but they’ve passed not a single new federal law to reduce gun violence.  Enough prayers. Time for some action. I believe the Senate should immediately pass three House-passed bills to close loopholes that allow gun purchases — purchasers to bypass the background checks. The vast majority of the American people, including gun owners, believe there should be background checks before you purchase a gun.”