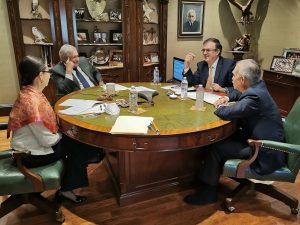 Many people had speculated what kind of relationship Mexico and the United States would have with a new administration coming in, it looks that the binational relationship will continue on good terms.

To those legislators and business, people on both sides of the border that were concerned about the binational relationship can put their fears to rest as both presidents have begun working on a bilateral relationship for the years to come.

President Lopez Obrador was one of the few world leaders that didn’t recognize Biden’s victory immediately. Most speculated that it was because of the closeness Lopez Obrador had with Trump that the relationship would not be a good one.

President Biden signed a proclamation saying that no more taxpayer money would go to fund the border wall that Trump worked for.

“Like every nation, the United States has a right and a duty to secure its borders and protect its people against threats. But building a massive wall that spans the entire southern border is not a serious policy solution. It is a waste of money that diverts attention from genuine threats to our homeland security. My Administration is committed to ensuring that the United States has a comprehensive and humane immigration system that operates consistently with our Nation’s values,” Biden said. “It shall be the policy of my Administration that no more American taxpayer dollars be diverted to construct a border wall.  I am also directing a careful review of all resources appropriated or redirected to construct a southern border wall.”

“The policy of my Administration is to protect national and border security, address the humanitarian challenges at the southern border, and ensure public health and safety.  We must also adhere to due process of law as we safeguard the dignity and well-being of all families and communities.  My Administration will reset the policies and practices for enforcing civil immigration laws to align enforcement with these values and priorities,” Biden stated.

Biden also shared his citizenship plan for illegal immigrants. It is a plan that will give protected status and a five-year pathway to a green card. If they meet certain conditions, such as payment of taxes and a background check, they could then be put on a three-year pathway to citizenship. Some estimates put the population of illegal immigrants at around 12 million as of 2015, other estimates are higher.

The two leaders agreed to work closely to stem the flow of irregular migration to Mexico and the United States, as well as to promote development in the Northern Triangle of Central America. They also recognized the importance of coordination to combat the COVID-19 pandemic.