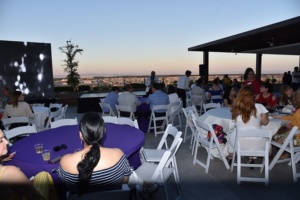 Surrounded by friends, colleagues, and a spectacular look view of Mexicali at night was the way Beyond Borders Gazette celebrated its 3rd anniversary.

The celebration took place at Punta Este in Mexicali that is the current tallest corporate building in the city. Friends, sponsors, and collaboration of the Gazette as well as business people, dignitaries from the education and government sector on both sides of the border, met to celebrate and learn more about the publication.

In the last three years, Beyond Borders Gazette has featured articles about people, culture, government, health and has put emphasis on the binational relationship of the Cali-Baja Mega Region.

Beyond Borders has been the bridge to connect the United States and Mexico. This year, Beyond Borders Gazette organized events that give back and bring value to the community. The event “Believe in your Dreams” was held at San Diego State University Calexico Campus where the student community of the Imperial Valley heard presentations from local successful professionals and a CETYS University Scholarship was offered.

For the future, Beyond Borders Gazette will open a book store in El Centro, California, that will be growing into a publishing company which is planned to offer printing services to local newspapers as well as publishing services. This is intended to also help develop local journalism in the Imperial Valley.

The next big project is the launch of Elite Tourism Magazine, a second publication that will start circulating soon.

Beyond Borders Gazette is already planning its first Binational Business Summit titled: “Horizons Without Borders”, which will be held on January 30th & 31st, 2020, and will create better relations between U.S. and Mexico companies, as well as some industries from Canada and Europe.