Being a Good Neighbor 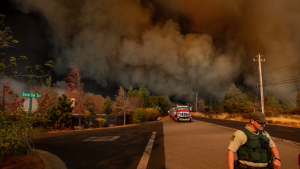 Three Imperial Irrigation District energy construction crews and an emergency response team spent part of the Thanksgiving holiday season in Paradise, California, working to bring electrical service back to an area that had been leveled by the worst fire in state history.

Under a mutual aid agreement with Pacific Gas & Electric, IID crews started making the 675-mile one-way trip on November 19 where, for more than two weeks, they set power poles and did a lot of overhead work to help PG&E and thousands of other responders across the state and nation rebuilt that area’s energy infrastructure.

Located in Butte County, east of Chico and north of Sacramento, the Camp Fire is the deadliest and most destructive wildfire in California history. It took more than 80 lives, engulfed over 150,000 acres, destroyed more than 18,000 structures, forced thousands to evacuate and caused billions in damages.

The tour of duty for IID’s crews at the Camp Fire was similar to the district’s call to action to the Carr Fire, which affected Shasta and Trinity counties in California earlier this summer. As an energy utility, the district prides itself in its ability to help provide the public something so essential – electricity – especially in times of need.

Under the mutual aid agreement, the district’s expenses are reimbursed. At times, the IID has benefitted from the same agreement, having received help following two sudden windstorms in the summer of 2017 that toppled many power poles in the Imperial Valley.

The crew noted that it was especially hard to spend the Thanksgiving holiday away from family and loved ones, but when the call for aid came, they did not think twice about it.

Said IID Harry Nelson, IID lineman foreman, “Should something happen here in the valley and we call for mutual aid, they’ll send their people too.”