Mexicali is a very different place than the regions in which the types and styles of beer that exist emerged. From the green valleys of central Europe irrigated by vast and cold rivers to our hot and dry deserts, there is – without the slightest doubt – a big difference. However, something unites us with those places to the extent that Mexicalenses have developed a beer vocation like few other places in the world. Beer is part of our local culture, our traditions, and our way of living with others to the point that it is unthinkable to meet someone without immediately uncovering a frost to celebrate the moment.

What seems strange to me about all this that I am telling you is not that we are inclined to drink beer, but that we have not developed a taste for a style of beer that also connects us without further ado with our geography, with our roots and our short history. History in an almost genetic way (at least the father of your faithful servant planted many tons of this wonderful grain in the Mexicali Valley). I mean beer with wheat.

Here we drink lager-type beer, mainly the Pilsner-inspired ones. That is the flavor that has best adapted to our character, our climate and the need to refresh ourselves at any cost. However, I am certain that we have disregarded the virtues of wheat beer, which turns out to be equally refreshing and fascinating.

Wheat beers are also called white beers for their cloudy and foggy appearance because they are not usually filtered –as Pilsners do- which gives them opaque orange and gold hues. They are top-fermented beers that use a mixture of wheat and barley that give them a defined flavor, almost like fresh bread. Its aroma is acidic and refreshing like a freshly cut orange and its dense foam helps to contain its flavor within the glass. Often, when ordering it in a restaurant or a tavern, the glass is adorned with a thin slice of orange that helps further define its refreshing aroma and flavor. 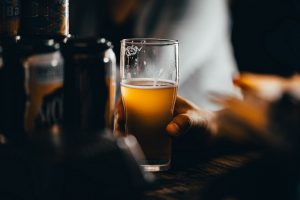 Produced extensively in Germany and Belgium (it was even brewed exclusively for Barbarian royalty for a time), this style of beer used to be brewed as a summer beer, but its growing popularity has led to year-round brewing.

Whenever the opportunity arises to treat a friend to a wheat beer, I notice with pleasure that, although the taste is new to them, they enjoy it enormously and end up ordering another and another. To date, I don’t know anyone who has made the ugly to a good wheat beer.

Until a few years ago, these beers were not easy to get in our region, however, they emerged in abundance when the craft beer movement arrived in our state. Now it’s very easy to take it in almost all the independent tap rooms that have sprung up everywhere.

Give yourself the freedom to venture beyond the traditional, what you take every day. The world of beer is very broad and very little explored by many Mexicans. However, since beer is the most consumed alcoholic beverage in our country, wheat beer is paradoxically one of the least known.