I don’t know why doctors and nutritionists disagree. Someone is lying to us. It is not worth confusing us with contradictory information on this topic that is transcendental to many: drink a beer.

“Drunkenness is the least of it – some say – what really damages us are other destructive effects that damage our heart, liver, kidneys, circulatory system, nervous system, and even our sexual life. After 13,000 years of existence, it turns out that beer is one of the worst attacks against our health. “If you are going to drink a distillate… have a little red wine.” There I ended up getting confused since wine is not a distillate but a fermented beverage, just like beer.

Alcohol, except for your best opinion, is harmful in any of its forms if consumed in excess. Whether it is wine, beer, whiskey, vodka, tequila, sotol, or any other type of alcoholic beverage. The big problem is what we mean by “excess”. There are doctors who will tell us not to listen to their colleagues who told us that we could not drink anything, and others will tell us that if we want to live healthily, we should stay away from any open beer. Will there be a way to organize a conference on this topic? We, drunks, would appreciate it for a unified opinion.

All this spiel came from an article published in Spain weeks ago where it is claimed that beer has favorable health effects. I will allow myself to reproduce this article:

“MEDICAL STUDIES IN SPAIN REVEAL THAT DRINKING BEER NOT ONLY” DOES NOT GET YOU FAT “, BUT MAY REDUCE THE RISK OF DIABETES AND HYPERTENSION.

Doctors Ramón Estruch, from the Internal Medicine Service of the Hospital Clínic of Barcelona, ​​and Rosa Lamuela, from the Department of Bromatology and Nutrition at the University of Barcelona, ​​assure that beer, drunk in moderation and accompanied by a healthy diet, does not cause an increase of body mass or fat accumulation.

The study was carried out on a trial group of men and women older than 57 years, who by age have a higher cardiovascular risk.

As the authors of the trial have indicated, the people who have participated by eating a Mediterranean diet, accompanied by beer in quantities of between a quarter and a half-liter per day, “not only have not gained weight, but in some cases, they have lost weight “but this always with balanced meals, and as long as people lead a normal life, with some exercise.

Beer is a fermented drink that receives the nutritional properties of cereals with which it is produced, just like wine, those of grapes, or cider those of apples, as explained by Dr. Lamuela. 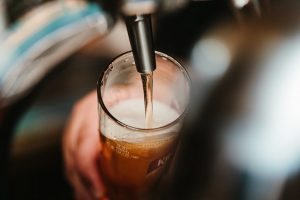 This drink provides a greater amount of folic acid, vitamins, iron, and calcium than others and causes a “protective” effect on the cardiovascular system.

Drinkers of “normal” amounts of beer have a lower incidence of diabetes mellitus and hypertension and a lower body mass index.

The eating pattern of Spanish drinkers “is far from the pattern of the Anglo-Saxon world, where the Munich model prevails, in which large quantities are drunk, practically without leaving a place, eating chips and sausages,” the doctor has indicated.

Research has also revealed that participants who drank beer moderately reported higher consumption of protein and carbohydrates, including fiber, than non-drinkers. “Be careful, these results are strictly related to three very important conditions: A) Moderate consumption B) A healthy diet like a Mediterranean diet (nothing like our tacos and junk food). C) Physical exercise.

Here I leave the information and my reputation to be smashed. I insist, all I ask is that you stop making us confused.

What new beer did you try this week? Explore, have fun, lose yourself in diversity. Look around the corner store.