This is one of the topics that I repeat every year due to its relevance to beer culture and tradition.

Whenever we think about having a beer, the most we get to choose between the light and the dark ones, right? However, drinking green beer is common in many European and American pubs around this time of the year.

We owe the green beer to Saint Patrick. Well… his loyal Irish devotees came up with this unique idea. As you know, Saint Patrick is the patron saint of Ireland, where he was born between 377 and 385 AD. The saint died on March 17 between 461 and 464 AD, hence every year on that day the tremoline is assembled in any place where there’s an Irish around.

The symbol of Saint Patrick is a green clover since in one of his catechesis he used one of those small plants that abound in the Irish countryside to explain the concept of the Holy Trinity; three leaves on the same plant. Since then the shamrock, the green color, Saint Patrick and Ireland are the same thing.

Our Irish brothers, who are just as party lovers and heavy drinkers as Mexicans, could not miss this unique opportunity to celebrate their most important holiday.

As they tell me about painting green beer, we owe it to a group of university students who devised this when in 1963 the university authorities, mostly English, trying to boycott the Irish student celebrations “pagan and of dubious origin … and in order to not let the cult of barbarian festivities introduce leisure as a tradition… ”arbitrarily they moved the delivery of monthly exams to the first and second week of March.

The university students fought back by meeting on March 10 at 6:30 in the morning – the time when the sale of liquor in pubs began – and drank lager to which they added vegetable coloring. They did this while toasting the traditions of their country, reading Irish blessings, and singing old folk songs until it was time to enter classes. They will already know the conditions in which they arrived at their classrooms. During the following days, they stoically resisted the attacks of their teachers trying to pass the exams with dignity and with the satisfaction of having resisted the attempt of the English to crush their traditions and their Irish identity. Essentially, painting the beer green was an act of rebellion that over the years became a picturesque local tradition. 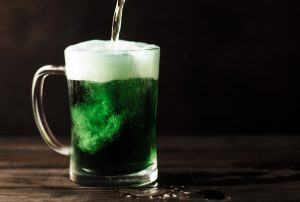 Part of this attitude included that green beer should not be bottled, but served straight from the barrel. Toasting with a green beer in hand is a symbol of Irish dignity and identity.

Currently, many of us drink green beer without knowing how they came to paint it. We assume that it is green because the clovers are green and that’s enough for us. The joke is to participate in the feast of St. Patrick, even if we don’t have any remotely Irish relatives.

In the city of Chicago for four decades a section of the waters of the Chicago River has been dyed green, a tradition that its residents and visitors of the city eagerly await, clapping while a boat scatters the painting to the sound of Irish bagpipes. Another manifestation of the strength that Irish culture has in the United States is the fact that the fountains of the White House, in Washington D.C., are also painted green on this day.

Green beer has become part of the universal beer anecdote. It tells us about how each society weaves its traditions using the elements of daily life that its environment provides, things as mundane as beer, wine, tequila come to acquire another meaning that transcends their initial nature.

Let’s drink beer in honor of those brave and unruly students of the 60s who marked a milestone in the history of the country of eternal green: Ireland.

Did you try any new beers this week?

Explore, have fun, lose yourself in diversity.