Breaking News
Home / Education / BE A TALENT MAGNET IN BAJA CALIFORNIA AND THE WORLD: MISSION OF CETYS AT ITS 58 ANNIVERSARY

BE A TALENT MAGNET IN BAJA CALIFORNIA AND THE WORLD: MISSION OF CETYS AT ITS 58 ANNIVERSARY 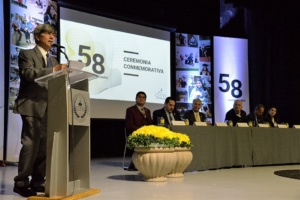 The Educational Institution has formed more than 41 thousand professionals who are agents of change with social leadership, around 26 countries.

Mexicali, B.C.- With the vision of being a space to enhance the talent of Baja California and the world, CETYS University celebrated 58 years of endorsing its commitment to the community by training leaders who impact not only the region but also to the country and the world.

As part of the celebrations, Dr. Fernando León García, Dean of the CETYS University System, expressed his gratitude to those who have trusted the educational project that was born in 1961, with the desire to be part of the development of the entity.

“CETYS is the reflection of the impact of an integrated educational model in a cross-border region, with a focus on our 2036 vision, where the intention is that Baja California can be a magnet of talent, creating a synergy of the local with the global and thus transcend” Commented Dr. Leon.

For his part, the president of IENAC A.C., Lic. Gustavo Vildósola Ramos, headed his first-anniversary event, where he said that CETYS year after year fulfills its mission of forming citizens that positively impact the community.

“It is an honor for me to represent IENAC and see how the vision 8 dreamers had every time becomes stronger, where the Institution is positioned with high-quality standards, relying on the talent of its students. I have faith that education is the key to the positive growth of society,” he said in his message.

Within the framework of the 58th Anniversary of CETYS University, there was the expert on issues of organizational branding, writer and international speaker James Kane, who offered a talk about “Loyalty in organizations”, where he spoke about the importance of finding a connection between collaborators and companies, highlighting the sense of belonging and trust within organizations.

“To talk about loyalty, you have to talk about truth and trust, about being the best version of yourself in all the roles you play in your life and transmit it to the working culture since through the sense of loyalty you can change to world” he reflected.

On the celebration, employees who are 5,10, 15, 20, 25, 30 and 35 years of age being part of the CETYS Family were recognized at the Mexicali, Tijuana and Ensenada Campus. In addition to the “Global Experience 2019” ceremonies, an event in which students who lived an international experience during the last year are distinguished.

This is how CETYS University welcomes its first 58 years of life, on the way to the new challenges and projected challenges in the field of education and innovation towards the year 2036.