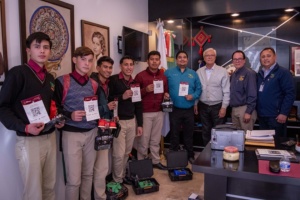 TIJUANA, B.C.- The governor of Baja California, Jaime Bonilla Valdez, delivered plane tickets to six CECyTE Altiplano students and the teacher who will accompany them to Quito, Ecuador, to participate in the ROBOMATRIX Ecuador 2020, on the 28th and 29th of this month.

The state governor said he was very proud to see them with great enthusiasm to compete in this international competition that belongs to the Latin American Robotics League, a specialty in which they have already won important awards.

Bonilla Valdez reminded them that the sponsorship was personally requested by the students themselves and their instructor, during a visit that took place at CECyTE subsystem campus, at the end of the “Day for Peace” in the Altiplano neighborhood, near Boulevard 2000, at the Tijuana East Zone.

“In that place,” he said, “They showed me their robotics work and told me that they have gone to various competitions of this kind worldwide, and they asked me to sponsor their plane tickets to travel to Quito, Ecuador, which I did not hesitate to accept”.

On that occasion, the High School students made a brief demonstration of how their robotics prototypes operate, with which they have already won the first three places at ROBOMATRIX Continental Headquarters 2018, in the city of Zapopan, Jalisco, and in 2019 Mega Robo Fútbol Category.

The general director of CECyTE, Javier Santillán Pérez and the director of the Altiplano campus of CECyTE, Héctor Rafael Castillo Barba, witnessed the delivery of the sponsorship.