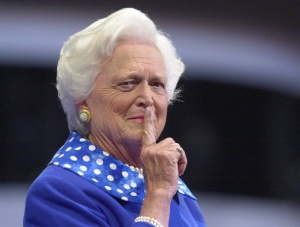 The world is reacted on April 17th to the death of Bush family matriarch and former first lady, Barbara Bush. Much has been said about her life in politics. She was the second woman to be both first lady and the mother of a president. However, as NBC reports her legacy truly lies with her family. Bush was married for 73 years and had six children, one of whom died very young from childhood leukemia. As her children say, Barbara forged through tragedy raising the rest of her children with strong values, and a desire to give back to their community.

It’s a philosophy that resonates with Betty Ng, the founder and CEO of Inspiring Diversity, LLC, and co-author of the new book, Po-Ling Power: Propelling Yourself and Others to Success. It tells the inspiring story of her own mother, who moved to America from China and managed to raise her four children through poverty to become successful leaders, always sending the message that giving back to others is just as important as achieving personal success.

“Barbara Bush leaves an incredible legacy as a strong leader, particularly when it comes to raising a family. Like my own mother, Po-Ling Ng, and other successful leaders, Mrs. Bush has powerfully demonstrated to us what it means to propel your family, community, and others to success,” says Ng.