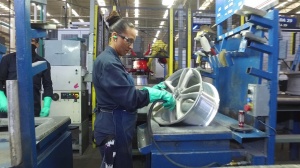 MEXICALI, BC- As a result of the conditions of competitiveness promoted by the State Administration headed by Governor Francisco Vega de Lamadrid, through the Secretary of Economic Development (SEDECO), it is announced that Baja California registered a Foreign Direct Investment ( IED) for an amount of 785 million dollars according to data provided by the Secretary of Economy for the second quarter of 2018, which positions the State in the 6th national place with the highest FDI inflows, contributing 4.4% of the national total registered this year.

The Secretary of Economic Development, Carlo Bonfante Olache, explained that by the origin of FDI comes mainly from the United States with 51%, followed by Japan with 15%, Spain with 13%, the Netherlands with 11% and Korea with 4 %.

He indicated that the main destination activities of the FDI were: manufacture of automobiles and trucks with 14%, manufacture of plastic products 12%, transport of natural gas through pipelines 11%, generation, transmission and distribution of electric energy, as well as banking 7%, respectively.

The state official noted that so far in the period of the current government 6,136 MDD have accumulated of FDI, 24% higher than the FDI captured in the same period of the previous administration.

“The positive figures indicate that it is necessary to recognize the progress of Baja California in the issue of attracting investments, taking into account not only the new investments but the expansions of already established companies, which show their confidence as they grow in capacity, jobs, new processes, including some that include technological development, “said the state official.

At the same time, he added that there is a great effort being done as business and educational community from different areas and the development achieved allows to keep attracting investments, “although there are still great challenges such as the training of talent, the rotation of personnel and better salaries, they do generate opportunities for those who live and for those who arrive every day to the State, “said Bonfante Olache.

Likewise, the regions make more proactive and aggressive efforts to attract the best investment projects of companies. In this sense, in Baja California, the policies of attraction and expansion of foreign investment are directed towards the regions where opportunities have been detected and where there are companies in strategic sectors. This is the case of the aerospace industry, the entity has the national leadership in a number of companies and jobs, he concluded.