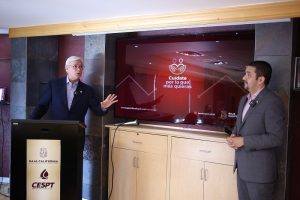 The Baja California Ministry of Health announced that 21,450 Pfizer vaccines arrived Wednesday, to advance the vaccination strategy in older adults that continue in rural areas and continue with suburban areas.

The Secretary of Health, Alonso Pérez Rico, specified that of the doses that arrived, 14 thousand 625 will be destined for older adults, 3 thousand 900 for the first line health personnel as part of their first dose, as well as 2 thousand 925 for health worker’s booster or second dose.

Dr. Pérez Rico pointed out that this Wednesday they would be applying vaccines in the Mexicali Valley: Ciudad Morelos; San Quintín: Nueva Era, Lázaro Cárdenas and Vicente Guerrero, as well as in the Ensenada Valley in Ejido Eréndira.

He explained that with the reinforcement of vaccines to the State, they are going to the Mexicali Valley to begin with the Valley of the Trinidad, Heroes of Independence, Real del Castillo, San Antonio de las Minas, the Valley of Guadalupe, and the Mission; as well as Valle de las Palmas, Nueva Colonia Hindú, Luis Echeverría, and La Rumorosa, on the Tecate side.

On the other hand, the Secretary of Health announced that Governor Jaime Bonilla Valdez authorized the opening, starting this Thursday, of pantheons, as well as circuses, fairs, and billiards, with capacity reduced to 30%, before the implementation of their health and safety protocol, so they can approach the offices of the health jurisdictions.

He specified that in the case of churches located in neighborhoods with a high rate of active cases, they must maintain a capacity of 25%, starting the following Wednesday, once the “geolocation map” of active cases is presented.

Regarding the update of the indicators, Secretary Pérez Rico reported that the Covid hospital occupancy in Baja California is 17.07%, with 791 beds available, 207 ventilators available, 119 hospitalized patients (confirmed by a laboratory), 70 intubated and the 0.72 effective reproduction rate.

Regarding the numbers of people infected by COVID-19 in Baja California, the SISVER (national) platform reports at the midnight cutoff on February 23 that 80,921 cases have been studied, of which 43,086 tested positive.