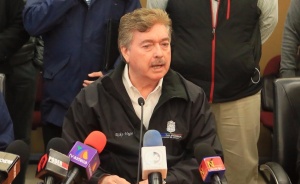 Faced with the expectation that a renegotiation of NAFTA will be achieved, state governor Francisco Vega de Lamadrid stated that he is hopeful that this treaty will be a win, win, win for the 3 countries at stake.

The state executive mentioned that he believes that the treaty will not go wrong, since it is being handled fairly well by the Mexican government and between those who have been participating in the renegotiation, such as the participation of private initiative in the three countries. However, he said we cannot stay with arms crossed seeing what happens and we must create the necessary infrastructure to be victorious in case a cessation of the treaty happens.

The governor of the state stressed that from the moment he took oath as governor, he has dedicated himself to carrying out important projects to increase competitiveness for the state of Baja California and so that, in case of conflict or disadvantage, as could be the case with NAFTA, we could also have a state with more infrastructure in water, in clean green sustainable energy, in communications, with an airport in Ensenada, a port El Nuevo Sauzal II, a Railway, which was signed in concession for Sauzal Tecate and everything that has to do with projects that are relevant to the state.

“In case of a NAFTA cessation all these projects would be much more important,” he said. “Which will make us competitive in infrastructure. For all those reasons, the issue of water is relevant to the population, so that everyone has water, and there’s life, and there’s health; it has to be a competitive state to attract investment”.