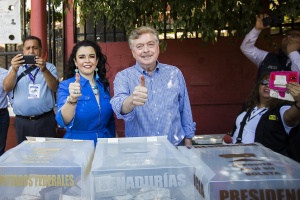 TIJUANA, BC- Sunday, July 1, 2018.- Baja California has historically stood out for conducting the electoral processes in an orderly and calm way, in which full respect for citizen participation has been privileged, said the State Governor, Francisco Vega de Lamadrid, accompanied by his wife and President of DIF Baja California, Mrs. Brenda Ruacho de Vega, they both came this morning to cast their ballot in one of the boxes located at the Buena Vista neighborhood of Tijuana.

During a media conference, the State Head informed that from 8 a.m. the Security Cabinet was installed in Mexicali, in the Coordination Group circuit, which was previously defined, so that during today they can attend any call from citizens, in the spirit so that elections in the entity are developed peacefully and safely.

In this regard, he announced that before noon there was no report that warranted the intervention of public force and he showed full confidence that the day will be carried out without any setbacks.

The Security Cabinet, which will operate permanently until the process is concluded, is coordinated by representatives of the Ministry of Interior, the Attorney General’s Office, the State Government, the 5 City Councils of the entity, police corporations of the three orders of government, as well as the National Electoral Institute.

Vega de Lamadrid, exhorted in a respectful manner all Baja Californians to fulfill their obligation as citizens since participation is fundamental for the democratic life of Mexico.