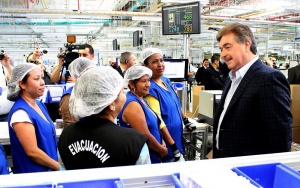 MEXICALI, BC- With the sum of efforts of the productive sectors and the contribution of business support programs promoted by the State Government led by Governor Francisco Vega de Lamadrid, the economy of Baja California started with a dynamic growth in the first quarter of 2018, as it was announced by INEGI in its Quarterly Indicator of State Economic Activity (ITAEE), in which the entity registered 3.5% before the first quarter of 2017, positioning the State in the 1st place of growth in the northern border.

By sector, it highlights the growth of 6.2% in the secondary, which includes mining, generation, transmission and distribution of electricity, water and gas supply, manufacturing and construction. The dynamism of this important sector for the state economy projects the entity in the 1st place of growth among the States of the northern border. The tertiary sector, which includes trade, tourism, and other services grew 2.1% compared to the same quarter of the previous year; and the primary sector that includes agriculture, livestock, and fisheries, showed a decrease of -4.0% due to the seasonality of some crops. The ITAEE is an indicator of the situation that offers an overview of the economic evolution of the states in the country, and is also an advance of the state GDP, so an encouraging picture is presented for the remainder of the year. Finally, the Secretary said that in the period of the current State Administration headed by Governor Francisco Vega de Lamadrid, there has been an average growth of 3.67% in the economy, above 2.5% nationwide.