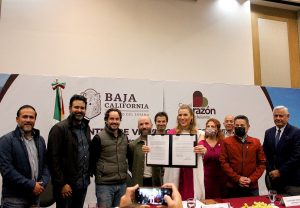 Just five days after taking office, the governor of Baja California Marina del Pilar Ávila Olmeda held an outreach meeting in the municipality of Ensenada with all organized sectors of vine growing and wine producers in the State in which she announced the decree of permanent repeal of the State Tax on the Final Sale of Beverages with Alcoholic Content for this 2021.

The purpose of the tax is the final sale of beverages with alcoholic content in closed containers, carried out in the territory of the State except for beer, obliging any natural or legal person to include the corresponding tax at a rate of 4.5 % on the sale price to the public, without considering the Special Tax on Production and Services (IEPS), finding out without any accreditation and definitively before the State Revenue Collection offices every month.

“Today I come to Ensenada especially excited because the promises are fulfilled and I made a commitment during the campaign with the wine industry of our State,” said Marina del Pilar Ávila, while pointing out that this measure is a clear message of harmony and collective work to improve the competitiveness of Baja California wine.

The announced decree will enter into effect once it is published in the Official Gazette of the State of Baja California on Monday, November 8. It will be applied exclusively to the production of wine produced in the region and will be of great support for vine farmers and wine producers, a sector that has been growing at a rate of 10% per year in the country and which is recognized as the second generator of jobs.

For his part, the Chairman of the Committee Provino Baja California Santiago Cosío Pando, after congratulating the Governor for her position, in his message explained the importance of adopting the necessary measures to make the protection of agricultural lands a reality, the infrastructure development that allows the inhabitants of the wine valleys to live with dignity, that the Revitalized Waters project for the Valle de Guadalupe was detonated and 4 significant actions were listed for the strengthening of this industry, including an annual budget for the promotion in National and international strategic forums, accessible financing schemes to invest in technology thus improving the quality of its products, the appointment of a Wine Ambassador and the elimination of the 4.5% state tax, which was precisely announced by Marina del Pilar Ávila for the approval of the sector in this meeting.

In the same way, the proclaimed “Governor of Baja California Wine” endorsed her commitment to the wine sector to continue promoting this agribusiness, which is why the Ministry of Tourism in the entity was reactivated for the promotion of wine and will soon be naming the called “Ambassador of Wine” who will be the direct link between the sector and the government. “I also take the opportunity to continue committing ourselves to the essence of the Valle de Guadalupe, the agricultural essence, we are not going to allow it to become the largest club in Baja California, count on our support to do so,” concluded Ávila Olmeda.