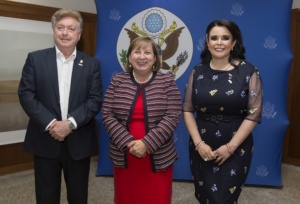 TIJUANA, B.C.- Tuesday, July 2, 2019.- On behalf of Baja Californians, the Governor of the State, Francisco Vega de Lamadrid, accompanied by his wife and President of DIF Baja California, Mrs. Brenda Ruacho de Vega, congratulated on Tuesday the American community and its government for the 243 Anniversary of the Independence of the United States of America, which is commemorated on July 4, context in which, highlighted the bonds of economic, social, brotherhood and friendship that unite Mexico and The United States.

The State President thanked the Consul General of the United States in Tijuana, Sue Saarnio, the invitation to this traditional celebration, where he said that during the current State Administration has promoted the approach, collaboration and have sought new opportunities for development and the welfare of the residents of both sides of the border.

The ceremony was held at the facilities of the US Consulate General in Tijuana and attended by officials from both sides of the border, members of the consular and diplomatic corps and representatives of different sectors of society