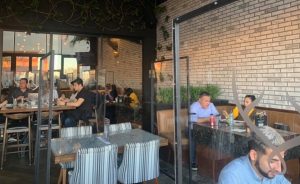 The head of the Public Health Department in the state presented the activities that may be reopened in Baja California even within the “red” tier; however, the protocols will have to be reviewed again to detail and validate them with very limited capacity.

The secretary of public health in the state, Alonso Pérez Rico, broke down each of the activities, beginning with gyms (swimming pools, sports centers, spas, and massage centers), whose proposed maximum capacity is 25%, once the security and health protocol is authorized by the governor of the state, he said that businesses will be able to “reopen”, between Wednesday and Thursday of this week.

He pointed out that restaurants and cafes will have their capacity at 30%; markets and supermarkets at 50%, allowing access to pregnant women and people with children and with the recommendation to set up a special collection box; 50% public transport.

Dr. Pérez Rico reported that recreational centers, amusement parks, and fairs are suspended, as well as nightclubs and bars; social venues can only be authorized if they have outdoor spaces.

“The only place where Casinos were not allowed to reopen was in Mexicali, but they’ll now be authorized, however it may be until the new protocol is detailed,” he said.

The Secretary mentioned that hotel occupancy will remain at 30%, with common areas where social distancing is respected; while professional sports continue with closed-door games.

The head of the Covid strategy in the state stressed that the state is still on “maximum alert”, with the reopening of certain activities to strengthen people’s well-being, however, he asked citizens to fully comply with the protocols and be responsible.

He mentioned that the Federal Government placed Baja California in the “orange” tier, however, the State Government maintains this entity in “red”, because of the continuing number of active cases.

In the daily report, he said that Tijuana continues in the “top 20” of the municipalities with the most active cases in Mexico, in position 15; while Mexicali leaves this metric and goes to place 22. This time the State reported 20 patients who died and 108 new cases of patients who tested positive for the virus.

The Secretary of Health reported that the Covid hospital occupancy is at 69.86%, with 288 available beds, 149 available ventilators, 573 hospitalized laboratory-confirmed patients, and 0.84 the effective reproduction rate.

Regarding the number of people infected by COVID-19 in Baja California, the SISVER (national) platform reports at midnight cutoff on January 17 that 64,293 cases have been studied, of which 37,518 were positive.