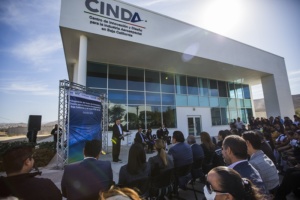 TIJUANA, B.C.- Baja California occupies first national place in aerospace sector with 94 companies, representing 25% of this industry in the country and generating 35,000 jobs, said the Governor of the State, Francisco Vega de Lamadrid, when inaugurating the Center for Innovation and Design for the Aerospace Industry (CINDA), which is part of a project with a total investment of 24.9 million pesos; and which will be led by the Technological University of Tijuana, at the facilities of the Technological Consortium of Baja California, in El Florido area​​.

During this act, where the STEM classroom of the State Education System was launched within the same center and in which students of 5th and 6th grade will use the new technologies, the State governor said that, with the support of science and technology, the entity is the fifth national destination in direct foreign investment, adding, so far this year 1,029 million dollars, and generating during the State Administration 244 thousand 733 formal jobs, with income above national average

When referring to the CINDA that will benefit public institutions and business organizations, he said “I recognize the UTT for assuming the commitment to lead this project that will strengthen the position of the State at the forefront of innovation and technological development, I also wish that the STEM classroom is very useful for the thousands of children who will visit it, which will help their integral formation”.

For his part, the UTT President, Othón Rogelio Casillas Ángel, informed that CINDA was concretized through resources from the CONACYT-Government of the State Joint Fund, to strengthen the innovation capabilities of companies in the state’s aerospace sector and Contribute to the increase in content.

He explained that the CINDA has a Strategic Plan, Operation and Business Model, as well as equipment of the area of ​​continuous training, enabling laboratories of Product Engineering Design and Validation area with virtual reality, Reverse Engineering Laboratory, Laboratory of Rapid prototyping and CATIA Certification.

It should be noted that Baja California occupies the eighth place in investment for science and technology, reaching a sixth place in scientific production and is second in information technology.

Meanwhile, the Secretary of Education and Social Welfare in the State, Miguel Ángel Mendoza González, added that the STEM classroom within the CINDA is part of the improvement route in the Basic Education curriculum, where it will be possible to reinforce what has been learned in the classrooms, as well as their application in real life.

Before representatives of the productive and educational sector of the region, he explained that these facilities will be an innovation ecosystem where students will work with the STEM methodology, which consists of the application of science, technology, and mathematics, in an interdisciplinary way, and thus better understand areas such as physics, chemistry, biology, among many others.