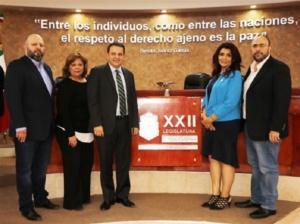 The Baja California Congress entered a lawsuit against 21 assemblymembers of the XXII Legislature, as well as three former mayors of the State. The lawsuit, which was received in the Official Party Office after complying with the healthy distance protocol established for a small group of people to enter the facilities of the Baja California Legislative Power building, is signed by Blanca Terrazas Alcalá, Alma Rocío Magaña Sarabia, Miguel Ángel García Leyva, and Armando Salinas Bravo. Upon receiving the document, the complainants were warned that it will be processed as of June 1, as this is the date on which the Legislative Branch is expected to resume work, due to the restrictions put in place because of the pandemic.

The reason for the lawsuit is the approval of the local Constitutional Reform to make possible the extension of the mandate for the Baja California governorship, and for this reason, they request that the aforementioned former officials be disabled, in accordance with the Law on the Responsibilities of Public Servants of the State.