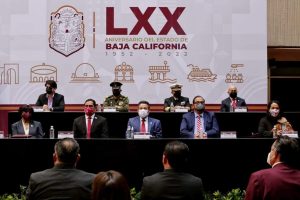 “It is a land that has been formed by migrants, a land that in the countryside, in the sea and in all activities such as industry, has built its foundations for its development,” said Zavala Márquez.

He indicated that by its very nature, development does not stop, and this is reflected today in the creation of more municipalities, which give greater representation to the more than four million citizens who currently live here.

The Secretary-General of Government also recognized the cultural diversity from other parts of the country and the world, but mainly the heritage of the native peoples of the region such as the Kiliwas, Pai-Pai, Cochimíes, and Cucapá, which are the basis of our identity.

He stressed that Baja California has an administration that, headed by Governor Marina del Pilar, seeks inclusion for all, eliminates both discrimination and forms of violence, especially gender violence, with the extraordinary support of the President of Mexico, Andres Manuel Lopez Obrador.

He reiterated that the entity is being led by Marina del Pilar towards the places that the people have demanded to continue advancing honestly.

“This Government is not going to fail the people, especially as our Governor Marina del Pilar states, with our Hearts Ahead we are making history with hope always in the future because in the present we Baja Californians are dedicated to working honestly to build this state for the future of our children, thus consolidating the Fourth Transformation of public life in Baja California”, concluded Catalino Zavala Márquez.

Representatives from San Quintín and San Felipe, sixth and seventh municipalities of the State of Baja California, also attended, as well as representatives of the municipal governments of Ensenada and Tecate.