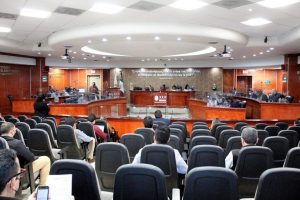 In the ordinary session of the plenary of the State Assembly, an initiative was introduced to approve the Protocol for the Prevention, Attention, and Punishment of Gender Violence in the Legislative Power of the State of Baja California, to guarantee the rights of women to live a life free of Sexual Harassment and any form of violence, as well as a proposal to implement an institutional mechanism to form a State Network of Women in elected positions.

In the explanatory memorandum of the first proposition, it was indicated that the General Access Law is clear when it indicates that the states, based on their attributions, will establish public policies that guarantee the right of women to a life free of violence in their labor and/or teaching relationships, they will strengthen the criminal and civil framework to ensure the punishment of those who harass, they will promote and spread in society that sexual harassment is a crime, and they will design programs that provide re-educational services comprehensive for victims and the aggressor.

This protocol is complementary to the initiative to reform articles 40 and 80 BIS, which creates Section X of Chapter III, of Title Six, and articles 85 BIS and 85 TER of the Organic Law of the Legislative Power of the State of Baja California to create the Gender Equality Unit of the Congress of the State of Baja California to plan, promote, and direct actions aimed at institutionalizing and mainstreaming the gender perspective in all its areas and in legislative action.

In that same sense, in the second proposition, a rogatory letter was presented to the General Electoral Council of the State Electoral Institute of Baja California to implement a mechanism to form a State Network of Women in positions of popular election in the State, to prevent and eradicate gender violence. In the same way, an invitation was made to the elected representatives to join to also eradicate political violence based on gender in the entity.

As legislators, it is a duty to promote and guarantee the rights of girls and women, which is why 2022 is the Year of the Eradication of Violence against Women in Baja California, as a turning point to promote and accompany actions, legislative measures, and public policies that establish the causes that promote them.

During the last electoral process 2020 – 2021 there was a historic advance since for the first time more women were placed in elected office, which allows identifying the maturity of the electorate to recognize the leadership and management capacity of women in elections, political activities, and the public life of the State.

In this context, Baja California has its First Woman Constitutionally elected to Govern the State, in the State Congresswomen legislators predominate, as in the City Council.  Due to the foregoing, the instances must provide support and follow-up to the stage of the public exercise of women’s power, that the appropriate mechanisms be activated, since some inertia is perceived in the practices of a macho past that resisted accepting the equality of conditions for the integration of women into political life in the State that seeks to limit, stigmatize and hinder the normalization of the work of women in government positions.

The proposals were introduced by the representatives that make up the parliamentary faction of Morena in the Congress of the State of Baja California.