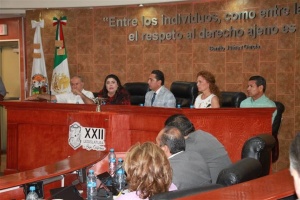 Baja California Congress approved ruling 1, 2 and 3 of the United Commissions of State and Jurisdictional Reform (CREJ), which is chaired by Assemblymember Bernardo Padilla Muñoz and Governance, Legislation and Constitutional Points (Cglpc), represented by Assemblymember Andrés de la Rosa Anaya, through which various Articles of the Magna Carta, Local Constitution and Secondary Laws are modified, added and reformed, among which stand out: Independent Candidacies Regulatory Law, Political Parties Law, Electoral Law of Baja California , Law of the Municipal Regime, Law of the Electoral Justice Tribunal and Organic Law of the Legislative Power.

Before the maximum tribune of the Legislative Power, the legislator Padilla Muñoz pointed out that the proposals presented separately before the United Commissions of the XXII legislature in political-electoral matter, were raised by citizens, legislators and the State Electoral Institute.

Of opinion number 1 endorsed by the Legislative Assembly in relation to the local Constitution, the period of lenth of political campaigns is modified, for governor it will be 60 days, while for municipalities and deputies the period will include 45 days, the re-election for assembly members must be by the same district that represents or contains at least one section of the previous one.

Similarly, the Political Party may vary the integration of the form if a member of the City Council decides not to exercise their right to re-election, the residence time to be a member of a City Council is reduced from 10 to 5 years.

The opinion number 2 approved by this Sovereignty reform to the Political Constitution of the United Mexican States and to the General Law of Political Parties in relation to the public financing to Political Parties, as well as its elimination for ordinary expenses of said Political Institutes.

Regarding Opinion number 3 related to the Secondary Laws, the following precepts are stipulated: For the Law that regulates the independent candidacies, required support is reduced to 2.5 percent of the nominal list, it is established that private financing cannot exceed 50% percent of the campaign cap.

With regard to the State Law on Political Parties, it is established to guarantee participation of both genders; the contributions of candidates and supporters during the electoral process will be 10% of the spending limit of the previous immediate election; for the purposes of preservation of the registration of a local political party, the valid vote cast will be composed of the votes of the political parties, independent candidates, minus the null and unregistered votes; the accreditation of a political party may be requested at any time, in a non-electoral year.

In addition, the Electoral Law of the State determines that those political parties or independent candidates that have registered a complete return will be entitled to the appointment of aldermen: The intention of reelection must be expressed in writing. Candidates are prohibited from attending support delivery events;

Moreover, amendments were approved to the Municipal Regime Law, where it is determined that they will not be able to use public resources that correspond to them for exercising their mandate to promote the vote; they will not be able to occupy the personnel assigned to the payroll of the City Council during their working hours to carry out campaign events. They cannot be present at public events related to the delivery of benefits derived from social programs, nor condition the delivery of resources from these programs, it is forbidden to publicize the government actions carried out in the period from the beginning of the pre-campaigns until the end of the electoral day.

In the same sense, the reform to the Organic Law of the Legislative Power prohibits assembly members from participating in the process of consecutive election to use the public resources of this Power for electoral purposes: to perform acts of expression that are carried out under any modality in the development of the plenary sessions or of commissions that contain express calls to vote against or in favor of a candidacy or a political party, to use the personnel assigned to the Legislative Power or to the assembly members in particular, in the work of political campaigns during the official working hours .

Amendments to the Electoral Justice Law were also accredited, through which powers are granted to the president of the Court to apply means of enforcement, disciplinary corrections and request letters rogatory; the secretary of agreements is established as responsible, to take control of sanction procedures.

For opinion number 2, the reservation submitted by Assemblymember Andrés de la Rosa Anaya was approved, related to the public financing granted to the Political Parties.

Likewise, reservations were approved to opinion number 3, the first of which was presented by the legislator Eva María Vásquez Hernández, which modifies the date of registration of the candidacies, by Mónica Hernández, the guaranteed reservation modifies the transitory of the Secondary Laws and by the Assemblymember Ignacio García Dworak, regarding the conformation of the form for reelection of city mayors, aldermen and syndics.