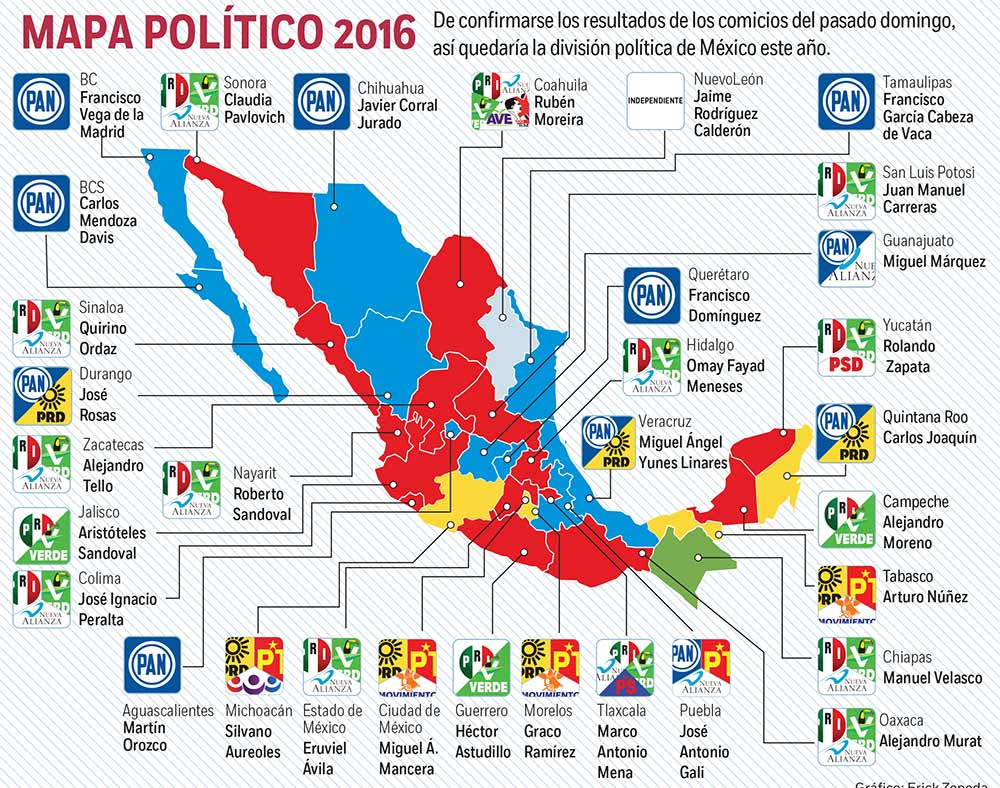 Mexico City.- It is not a collapse, but as if it were, that’s the cold reality the Institutional Revolutionary Party is facing, PRI in Mexico, before the disastrous results obtained in the elections on Sunday, June 6th. Losing 7 governorships and gaining only 5.

The tricolor had proclaimed that at least in states the party currently rules, the triumph was insured; the opposite result was so overwhelming that the President of the tricolor, Manlio Fabio Beltrones Rivera, said that the PRI must change attitudes and create a reconnection to the public.

He explained that the alternation that has occurred in at least four states, precisely those hurt: Veracruz, Chihuahua, Durango and Quintana Roo, explained by the PAN- PRD alliance represents a message from the people to the PRI and their governments to “operate differently to improve and change”.

There’s no need for beating around the bush trying to find the reason for what happened. It is not the first time we say it, but we are forced to repeat it, for quite some time Mexican people have been apprehended or has learned about the power of their vote.

In fact, the Mexican voter knows and has proven that their vote rewards or punishes, and that is exactly what happened this 6th day  of the sixth month of 2016.

Without much thought, there are two constant mistakes the PRI party has made and which have cost government policies and positions, including the Presidency of the Republic in 2000.

Don’t look for further explanation, the PRI lost 7 governorships, including the considered crown jewel , Veracruz and no less important, Chihuahua, Tamaulipas, Quintana Roo, Durango and Aguascalientes. Just as something obvious Puebla was taken for granted.

Not even in the worst scenario we had this situation, confessed bravely the general secretary of the PRI, Carolina Monroy del Mazo. We on the contrary as we aimed from the beginning, the electoral failure of the tricolor is more than determined, seen and tested, why?

Because all the states where the PAN-PRD coalition won, are the same who suffered or still suffer the most disastrous administrations of PRI governors, all this mixing up to the explosive formula for defeat: the imposition of awful candidates. By the way, most of them old tricolor militants who after facing the leading commanders’ contempt they rather moved to the opposition, and with their achievement showed that the impositions of power, eventually fail, fail as it happened last Sunday to the old invincible PRI.

Teodoro Rentería Arróyave is a journalist and writer; President of the National Association of Graduates in Journalism, CONALIPE; Secretary of Social Development of the Latin American Federation of Journalists, FELAP; Founder and honorary president of the Federation of Mexican Journalists, FAPERMEX, member of the Standing Advisory Council Club “Primera Plana” and Professor of the National Academy of History and Geography, ANHG. I appreciate your comments and criticisms teodoro@libertas.com.mx, teodororenteriaa@gmail.com. We are heard at frequencies throughout the Republic of “Libertas Radio”. We invite you to visit: www.felap.info, www.ciap-felap.org, www.fapermex.mx, and www.clubprimeraplana.com.mx