B. C. STATE GOVERNMENT CELEBRATES CEREMONY TO COMMEMORATE THE 198 ANNIVERSARY OF FLAG DAY 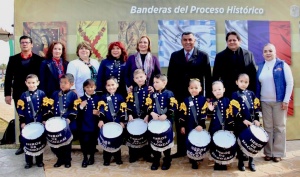 MEXICALI, BC- Sunday, February 24, 2019.- On behalf of the Governor of the State, Francisco Vega de Lamadrid, the Secretary-General of Government, Francisco Rueda Gómez, led the formal ceremony of raising the national flag in the presence of students, citizens, military authorities, and officials of the three branches of government, within the framework of the ceremony to commemorate the 198 Anniversary of Flag Day.

The state official affirmed that the national flag, is for Mexicans one of the most important symbols that for more than 198 years has united this great nation; patriotism is represented on the flag, as well as the ideals of freedom, independence, sovereignty, democracy, and national unity.

“This tricolor flag that proudly waves its history, which from school years we learned to honor and defend if necessary; the Mexican flag motivates us and inspires us with deep respect every time it is hoisted, every time it flies and shows itself in all its splendor, especially when we expose it and show it to celebrate triumph, an event or special holiday, it is it the first thing that we honor and that we show with great pride as Mexicans, “he said.

In his final message, the Secretary-General of Government said that in Baja California the commitment is to continue working together for the benefit of our State, beyond ideologies, beyond colors or partisan positions, because we are all united by our sense of identity and belonging to this great land of opportunities and progress for all who live here.

In Baja California we honor our Mexican flag, he emphasized, and we give it this day and every day of the year, a tribute and a solemn tribute, for all the good and great that it represents and symbolizes for all Mexicans.