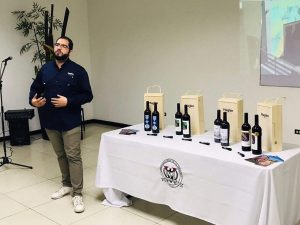 A good harvest of medals and international recognitions were obtained by Baja California wines in 2021 and an example of this is the labels of the Maglén winery that were presented this week in a press conference held at the Vizcaya University of Las Américas in Mexicali.

This is how Baja California wines continue to position themselves, due to their quality, care, and affection with which they are made, as is the case with those produced by Maglén winery, located in San Antonio de las Minas, Ensenada, which this year obtained medals and recognitions with four of its labels.

During the presentation, the “Wine Maker”, Manuel Montoya, explained that the Maglén wines were awarded in two international competitions during 2021, the most recent being Global Wine, presented by the magazine “El Conodor”, in which it was won a double gold medal with the 2018 Cabernet-based Reserve and a silver medal with the 2018 Petit Verdot.

He also added that also in the middle of this year Maglén’s wines were awarded in Mexico International Wine Competition (MIWC), an event that has been positioning itself internationally due to its 25-year tradition under the organization of the Autonomous University of Baja California, and in which two gold medals were obtained with the Nebbiolo 2020 and the Petit Verdot 2018.

“This is a source of pride since we are a very young winery since we started in 2016 with a small production of around 600 and 800 boxes on average; as of today we produce around 2,500 boxes per year and next year we hope to double our production to 5,000 boxes,” he commented.

The “Wine Maker” indicated that this winery manages two lines, “Maglén” and “Saga” and that from next year it will be participating in all international competitions. “That is our goal and as a novelty, we are about to release a wine with orange tones and also this year we made for the first time a sparkling wine with the traditional method, which is French,” concluded Manuel Montoya.

The presentation that took place in the audiovisual room of the Vizcaya University of Las Américas, Mexicali campus, was attended and participated by various media, as well as special guests. After this activity, a sample of their wines and the gastronomic offer was carried out with the account of this wine tourism complex.